On July 28th, cryptocurrency investors all over the world put aside everything, just to Do one thing! Staying up late to watch the Tokyo Olympics? No, they are rushing to buy CSSA Token! 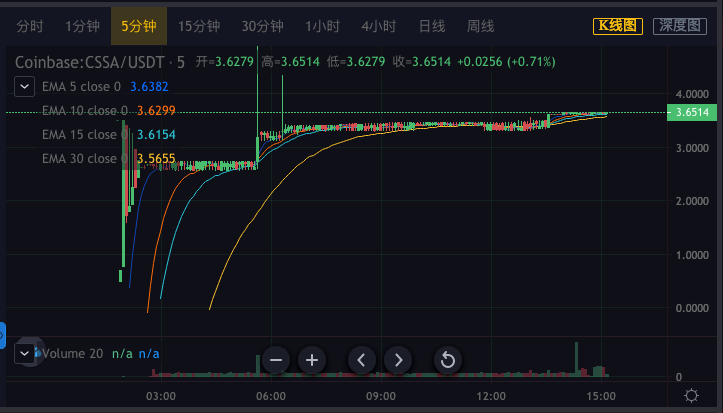 CSSA Token was officially launched on the Viproex exchange on July 28, registering, buying coins, selling coins, and instantly poured tens of millions of member traffic, causing the system to overload. The official also issued an urgent announcement stating: Network congestion affects multiple services in currency transactions, fiat currency transactions, and OTC transactions, and users may experience performance degradation or intermittent errors. We have confirmed the root cause of the conges-tion and hope to restore normal service as soon as possible. During the system revi-sion period, the deposit and withdrawal services may be extended.

Even so, the popularity has not diminished at all, but it has attracted more attention and topicality! According to the Viproex exchange, about 7.5 million accounts across the entire network were snapping up CSSA Tokens during the peak period. How much is the CSSA Token that is popular on the whole network? Make investors so crazy! ? Let us first look at a few more important data.
As shown in the figure, CSSA Token was launched on the Viproex exchange on 7.28. The opening price was only 0.1U. After the opening, investors sought after and began to skyrocket. It rose to a maximum of 15U that day, an increase of 15000%, and then the currency price Cushing higher and callback, the lowest price since the first launch is also about 40 times the opening price, only waiting for the opportunity to continue to break through. What is the origin of CSSA? The opening is so popular among investors. The capital market is the most sensitive, and the advantages of technology will hide in the currency price. CSSA must have its own unique features.

CSSA Token is a high-performance public chain built for NFT applications. It is a com-pletely decentralized and publicly available blockchain. Anyone in the world can read and send transactions on the CSSA Token super public chain. The online transaction can be effectively confirmed, and the data cannot be tampered with according to the collaborative specific algorithm.

Through the decentralized execution of NFT and the technical characteristics of mul-ti-feature interaction, in the world of CSSA Token, users can obtain multiple social experiences including avatars, positioning of other users, voice chat and virtual envi-ronment interaction. The CSSA Token super public chain has a very clear develop-ment plan at the beginning of its creation, and has been firmly implementing the plan. With the opening of the launch of the super public chain, a new map of CSSA Token strategic development has also been opened. .

The common goal of CSSA Token’s listing on Viproex exchange is: win-win, integrate resources, share benefits, join forces to open the market and build consensus. 1) CSSA Token acquisition platform Viproex Exchange helps CSSA Token increase its visi-bility and exposure by providing a platform with tens of millions of potential investors and users around the world. 2) Viproex exchange gets traffic As the world’s leading exchange, Viproex is well aware of the importance of user volume to the exchange. It can be said that there is no traffic, even if there is no high technology, it is useless. Therefore, through cooperation with CSSA Token, the injection of traffic can be ex-pected . 3) Win the trust of the market For investors, trust is the most basic require-ment. How to ensure the safety of funds is the top priority of customers. Therefore, the Viproex exchange, which has obtained the MSB blockchain license, and the CSSA Token, which has obtained the NFT technology award, can be said With the most reli-able third-party recognition, customers also have a sufficient sense of security. This time, CSSA Token is a dark horse, combined with hot NFT topics, and listed on the in-ternational exchange Viproex. It is obviously an excellent win-win strategy. It success-fully triggered considerable market topics and gained great exposure and publicity. , The speculation of over-the-counter trading is even more spectacular. Many venture capital funds have already quietly deployed. It is foreseeable that they will usher in a drastic pull-up effect. Today is bound to become a very critical day in the history of CSSA Token. Or even ten thousand times currency? Many investors in the market are looking forward to it.