Bitcoin adoption around the world varies immensely. Various factors can contribute to this, from legal regulations, to media coverage, and general consumer awareness.

When it comes to which country trades the most Bitcoin, The United States of America is sitting pretty atop of the tree (with around 23% of the total Bitcoin trade), followed by Russia, the UK, and surprisingly to some, Venezuela. The latter’s recent dalliance into the Bitcoin world is largely due to the unstable situation happening within the country itself, and the knock-on effect it is having on the currency. The US, Russia, and the UK, however, are generally thought to be countries in which the notoriety of Bitcoin, and its associated opportunities are the driving force behind the interest. One other interesting data point, is that sitting in eighth place, is Australia. 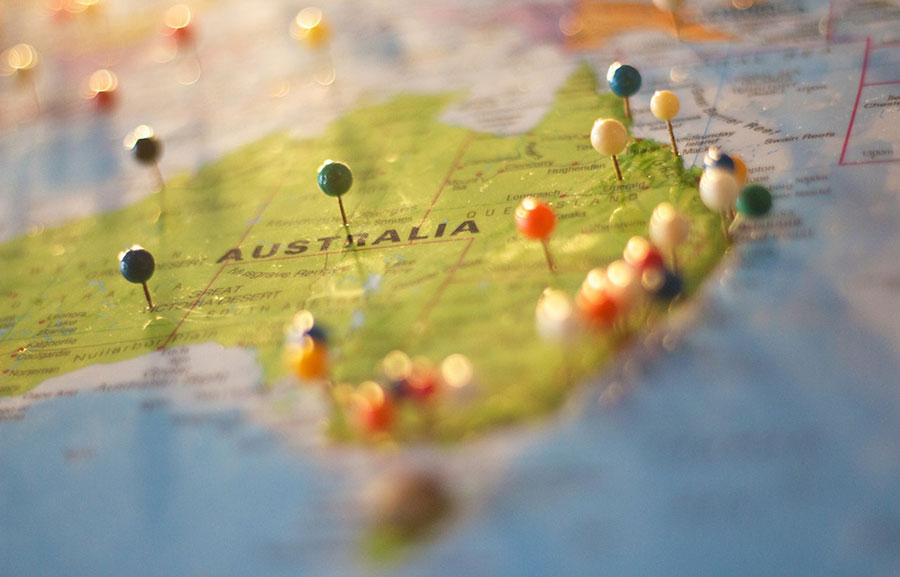 Whilst Australia too has been privy to all the media highlighting of cryptocurrency in recent times, sitting in 8th place in the Bitcoin trading league is probably higher than most people would have imagined. After all, we are talking about a country with only 25 million people. With the rest of Europe (excluding the UK) trading around 4.5% of total Bitcoin trades, Australia, weighing in at around 3% of worldwide Bitcoin trading, is a curious statistic. This leaves us with an interesting question, just why is it that Bitcoin trading in Australia has become so popular?

2017 was a particularly important year for Bitcoin. Not only did the cryptocurrency reach its heady height of almost $20’000 for a single coin in December of that year, but the apparent success of this drove news organisations wild with excitement. For many people, the first time they heard about a cryptocurrency was in that year, as segments were run on the nightly news, and various websites dedicated article after article to this relatively new, sometimes confusing, and above all extremely interesting new addition to currency trading options. Australia, ahead of the crowd, began to react to what looked like a changing of the monetary landscape.

In February of 2018, Brisbane airport became the first in the world to allow Bitcoin, along with other cryptocurrencies such as Litecon, Dash, and Ethereum, to be used within the airport. This meant that not only could you buy your airline ticket with Bitcoin, you could also use it to pay for your snacks in the airport restaurants.

Moving away from air travel, Australians are now paying their bills via Bitcoin, in ever-increasing numbers too. By November 2017, reports by the LRoS (Living Room of Satoshi) indicated that they had dealt with over $1m in bill payments, with Bitcoin as the medium. Forsyth Real Estate is another company moving into the Bitcoin realm, allowing the purchase of property via cryptocurrency. When trusted companies such as these make a move such as this, the idea starts to become less radical in the eyes of other companies across the country. As such, we can expect to see more and more companies take up crypto payments in the near future.

Australian parliamentary lobbyists too, are looking at Bitcoin as a legitimate payment method, with members of the Labor party uniting with the 2017 coalition government in backing Bitcoin, and asking the RBA to recognize it as an official currency. It seems that from consumers, along with private companies, and through to government itself, Australians are looking at Bitcoin in a way that will put them ahead of most others if (or more likely, ‘when’) Bitcoin continues on its path to being taken seriously in the international currency stakes.

With such a relaxed approach to cryptocurrency regulation in general, Australia is sure to be one of the first countries to benefit in a big way when Bitcoin finally stabilizes to the point that most countries accept it as a legitimate form of payment. Having the infrastructure in place before others have even contemplated it, could allow Australia to lead the region in Bitcoin trading for years to come. Somebody has to be the crypto leader in Oceania, and right now, it seems that the ‘land down under’ is going to be a big player in the future, pioneering the way in the crypto-trading space, and showing the rest of the world how to evolve into the modern era of currency trading.