Dash stands for digital cash. Dash protocol, based on bitcoin’s codebase, was created by Evan Duffield back in 2014. What makes it different from bitcoin is its focus on payments segment of the market. Dash developers aim to create a universal payments mechanism that involves merchants, online point of sale and user-to-user transfers. 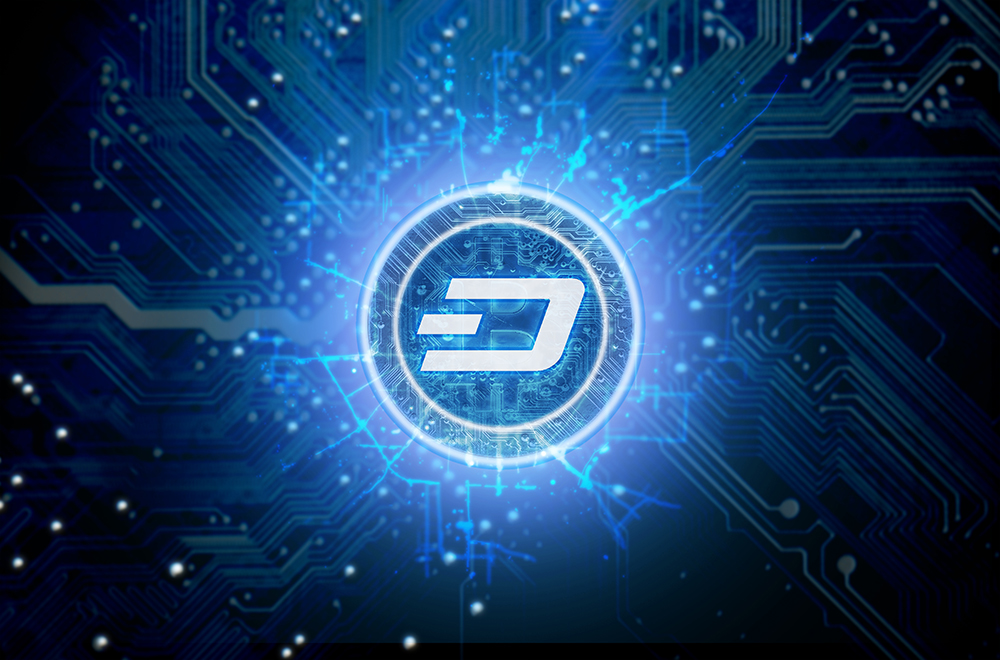 Dash has become one of the most popular cryptocurrencies (top 10 by market cap), generating a good deal of interest from cryptocurrency adopters and investors. But dash has grown phenomenally not just because of a loyal community, but equally owing to its technology. Ryan Taylor, CEO of Dash Core, believes the value of digital currency is the ability to transact; high technology level behind cryptocurrency makes it widely available.

Right now bitcoin scalability issue is not solved (SegWit2X hardfork was recently cancelled, possible implementation of Lightning Network is still a rumor). As more transactions appear on a network, those trying to send funds will need to add higher fees to ensure their transactions go through faster. That’s why due to rising popularity of bitcoin over the last few months, bitcoin transaction fees have skyrocketed. Many large businesses, who cryptocurrency users, are looking to switch from bitcoin to dash.

Dash Core team is constantly working on scaling their cryptocurrency to a larger number of transactions per second. Currently the block occurs every 2.5 minutes, the block size is 2MB, which means that dash network capacity is already 8 times larger than that of bitcoin network (1MB block is generated once per 10 minutes).

The capacity of dash network will grow further as long as new features are developed and implemented by dash team of 60 people or so. They work closely with Arizona State University in doing research on various scaling techniques. Dash team members are also creating their own custom hardware specifically designed for mining purposes, thousands times faster than general-purpose CPU.

“We are doing research on how fast can we propagate blocks on blockchain if we build special-purpose hardware for our masternode network . If we focuse on propagating large blocks as quickly as possible, we can scale to transactions capacity similar to Visa level,” says Ryan Taylor. Payment network Visa currently averages at 2000 TPS, and, according to official VISA sources, is capable of processing more than 24,000 TPS.

Dash ecosystem is self-governed, it was set up as a decentralized autonomous organization (DAO). Such governance structure allows to fund the developers’ team, keeps the whole ecosystem independend and helps to cover fundamental expenses. Three separate organizations are operating under dash DAO: Dash Core, Dash Force and Dash Labs.

Dash Core is the original, and by far the largest, of these groups, and takes care of the creation, maintenance and dissemination of the main dash code.

Dash Labs, created very recently, works on future dash technology to ensure the network remains competitive beyond the present-day market. It is based in Hong Kong and focuses on developing custom hardware. A main goal of Dash Labs is to both advance and decentralize the production of cryptocurrency-specific hardware, benefiting not only dash but the entire cryptocurrency space.

“Dash Labs aims to create the first open-source versions of many different types of hardware. Our goal is to help the digital currency space to remain open and transparent, while reducing the economic advantages of closed-source proprietary technology. For example, advanced open-source ASICs would eliminate most of the advantages of privately-developed ASICs. As a result, mining centralization could be significantly reduced,” says Evan Duffield.

Dash’s hardware ambitions are expected to come to fruition in 2020, with plans to put masternode hardware on individual chips.

DAO also provides a way to make decisions on further development. Masternodes were implemented to achieve just that.

Anyone can run a masternode, the only condition is that operator requires to have 1000 dash. The block reward is split between PoW miners and masternodes, with each group earning 45% of the block reward. The remaining 10% of each block reward funds the “treasury” system.

Masternode owners vote and decide where the funds from “treasury” go. Voting results are recorded directly onto dash blockchain and help to decide which projects are good and likely to benefit dash ecosystem. Decisions with the majority of votes get a green light. Community interaction with people who submit proposals is done through dash forums and other community-driven websites. These websites allow participants to provide multiple drafts, then lobby for community support before finally submitting their project to the network for a vote. After the participant gathers enough support, the network automatically pays out required funds in the next super block, which takes place monthly.

Funding from the treasury system is also used to hire additional developers and employees, to sponsor conferences, and fund integrations with major exchanges and API providers.

Masternodes also have to keep and update a full copy of the blockchain, as well as provide InstantSend and PrivateSend functionalities, which set dash network apart from every other blockchain, solving a lack of privacy problem and increasing transaction speed.

During a transaction coins are transferred from sender to receiver. In bitcoin blockchain, for example, both sender and receiver addresses are recorded for every transaction. Everyone can check the source wallet (transation input) and the target wallet (transaction output).

Dash users can use PrivateSend option to hide their transactions. The technology mixes inputs and outputs for a lot of different transactions, breaking a traceable history of coins on blockchain, making impossible to locate the sender and receiver for specific transaction.

Masternodes never have direct access to users’ funds, but work only as intermediary, broadcasting request to mix a certain amount of dash and then handling the process once a counterparty is found.

InstantSend is another solution, which utilizes masternodes.

If the customer doesn’t want to wait for transaction confirmation for several minutes, dash masternode-enabled InstantSend comes to the rescue. Although blockchain-recorded confirmations arrive every 2.5 minutes, a small number of masternodes can provide irreversible confirmation within 1 second. It is done in the following way:

– Ten masternodes are selected randomly every time a miner finds a block through PoW (this happens every 2.5 minutes). These masternodes are considered InstantSend authorities till the next block is found.

– Every time the user sends dash to someone employing InstantSend feature, ten selected masternodes receive a broadcast. The inputs of such transactions are announced “locked” by masternodes. Then the message about a “locked” transaction is broadcast further to the network.

– From that moment on the transaction is recorded, and all other transactions, which have the same input but send coins to a different address, will be rejected. Such locking mechanizm solves a coin double-spend problem on the entire network protocol level.

KuvaCash project is a great example of how dash masternode owners make decisions on ecosystem development.

It’s a program designed to solve Zimbabwe’s ballooning inflation, collapsing currency, and declining national economy. According to dash team, KuvaCash is a Dash-record 550,000 USD undertaking, funded directly by the Dash treasury via its unique governance model, aiming to provide Zimbabwe with its first-ever peer-to-peer localized cryptocurrency payment service for anyone with a phone-number-based messaging system.

Currently, locals wait hours in bank queues to access their accounts, experiencing exorbitant fees on transactions. The Zimbabwean government has tried to solve the crisis by issuing bond notes matching the price of the US dollar as a fix, but this remains a stop-gap measure, rather than a sustainable money system. KuvaCash intends to develop a phone-number-based cryptocurrency payment service that will allow Zimbabweans to seamlessly move between dash and USD.

“I have been advocating for quite some time the potential benefits Dash can provide to economies with less stable currencies, and Zimbabwe seems a prime location for these benefits. This project in particular is well-researched with value propositions, branding, and go-to-market strategies tailored to the local market. Combining the ideal network – Dash – with a well-considered strategy should lead to a high probability of success,” said Ryan Taylor.

Set to launch in Q2, 2018, KuvaCash will introduce a cash replenishment model to instill confidence in residents, allowing them to convert their digital currency into USD any time, reduce transaction fees, and provide enhanced financial security and liquidity.

KuvaCash is currently pursuing a money exchange and remittance license in Zimbabwe and the project is expected to receive government and reserve bank backing.

Not only self-governed DAO, masternodes functionalities and promising projects in different countries make dash stand out. There is a promising product in development right now – Dash Evolution. Its goal is to allow an average person to use dash without knowledge of cryptocurrency. Dash Evolution has been designed as a scalable and user-friendly currency platform for mass adoption. Evolution will be available across different devices and will add a layer of simplicity that’s currently lacking in other currencies.

“Dash Evolution will dramatically improve the experience of using a digital currency. Our aim with Evolution is to tear down the barriers to adoption for both merchants and consumers so that any person, no matter their age, nationality, education, or technical proficiency, can use digital currency everyday and for almost any purpose. Think of Evolution as online payments, a system similar to PayPal or Venmo, but completely decentralized, so that a user is always in control of his or her own money. Moreover, Evolution will be incredibly inexpensive, with no cross-border fees or restrictions. Disruptive innovation in the payments space is accelerating; with our approach, Dash could be the first to bring digital currency to a truly massive audience,” said Ryan Taylor.

Dash will follow the best practices of integration into online stores to make payments as easy as PayPal. Software development kits and sample snippets of code will be available to merchants and those hosting webpages for merchants. It will allow to integrate dash payments easily.

Dash CEO Core Ryan Taylor is yet another reason to pay attention to dash. He is an expert in the payments industry with over 15 years of experience in financial services and technology. Prior to Dash, Ryan was a hedge fund analyst covering global payments industry investments for private equity and public market funds of a $20-billion investment firm based in New York. He is charged with a comprehensive understanding of payments landscape and awareness of success drivers within the payments industry. Ryan was previously an Associate Partner at McKinsey & Company’s Business Technology Office in New York, where he dealt with senior executive clients of some of the world’s largest financial institutions, covering a variety of strategy and technology topics.

Current market cap of dash is about 5 billion USD. Comparing to bitcoin’s 180 billion USD, it’s absolutely trivial. But taking into account the advantages, comparable to bitcoin and other cryptocurrencies, it will catch up very quicky. One of the most technologically advanced and promising cryptocurrencies is on its way to a seamless mass adoption.