The Event Horizon 2018 conference drew loads of professionals from energy and blockchain industries. The main objective was to connect developers and startups creating software infrastructure for renewable energy trading via blockchain with investors and venture capital firms looking to support promising projects.

The interest to renewable energy doesn’t arise solely from the promotion of clean energy, but also because the cost of electricity generation from renewables is becoming cheaper than from traditional fossil fuels. This leads to the fact that now there are concerted efforts amongst developed countries to switch from dirty forms of power generation to cleaner and more sustainable energy sources.

According to the International Renewable Energy Agency (IRENA), the current cost spectrum for fossil fuel power generation ranges from $0.05-$0.17 per kilowatt hour (kWh). Global weighted average costs in 2017 for onshore wind and solar PV stand at $0.06 and $0.10 per kWh respectively. Solar PV costs are expected to halve by 2020, so the best onshore wind and solar PV projects could deliver electricity for as little as $0.03 cents per kWh, or less.

We hit some luck to have had an extensive discussion with Tom Helliwell, senior manager of Green Power Exchange (GPX) startup, founded by experienced energy professionals, which aims to become a global platform for peer-to-peer renewable energy trading.

Tom talked about the problems in energy markets, perspectives of renewable energy, GPX vision on how to make renewable energy trading simple and convenient, and shared the GPX whitepaper.

Apart from being engaging for readers, the whitepaper in many parts looks like an academic treatise with a lot of research related to energy markets. Not only does the team describes the features of GPX platform, but it also provides a comprehensive study of current state of energy markets and reasonable outlook for the future. The whitepaper really helps to understand the issues of energy markets.

Tom told us that currently electricity is mostly generated from fossil fuels, which makes energy markets inefficient and not transparent. Despite representing a trillion-dollar market annually, the existing electricity trading mechanisms in the wholesale electricity markets are complex and accessible only to major utilities and large power consumers, which limits end user participation and has resulted in monopolistic behavior by major energy providers.

Energy is traded via closed auctions, usually with few participants – large wholesale companies. In many cases this leads to market price manipulations, as it’s not possible to determine how much of excess cost they add while reselling energy to retailers.

All of these stages contribute additional margins to the final price.

So, the final price of energy for end customer can be much higher that its cost.

Furthermore, Tom said that the difference between renewables and fossil-based power plants is that solar and wind facilities can be interconnected with end customers on a distribution level due to their smaller individual project size. This means transmission costs can be minimized for renewables, enabling significant savings.

How Green Power Exchange is going to transform the energy market

Currently, it’s difficult to sell energy directly from producer to consumer. Even on the local scale retail companies take part in the process, buying energy in bulk from producers and reselling it to end user with a price markup.

For example, the producer may normally receive $0.06 per kWh from wholesaler or retailer, but end customer usually have no other choice, but to pay something like $0.20 per kWh. So there is a great price increase due to presence of many intermediaries in the electricity supply chain, and every intermediary tries to add as much to the price as it can. Producer may not receive extra revenue, but end customers spend extra money.

As producer and end buyer are set apart, it’s very difficult for them to reach an agreement on the price suitable for both.

But if producer and customer are able to trade directly, it’s possible for them to agree on the price of $0.1 per kWh, which will benefit both of them, even if the customer pays additional $0.02 to local distributor for renting its grid lines. So, the producer can receive $0.1 instead of $0.06 per kWh, and customer can pay $0.12 instead of $0.20 per kWh. Both win.

GPX is developing a solution, which will eliminate intermediaries, and introduce a simple, easy to use streamlined peer-to-peer (P2P) platform to buy and sell renewable energy. This will allow to link customers and producers directly, and will result in significant cost savings for customers, while producers will receive higher prices. The only cost incurred will be payments to local distributor for renting its lines. 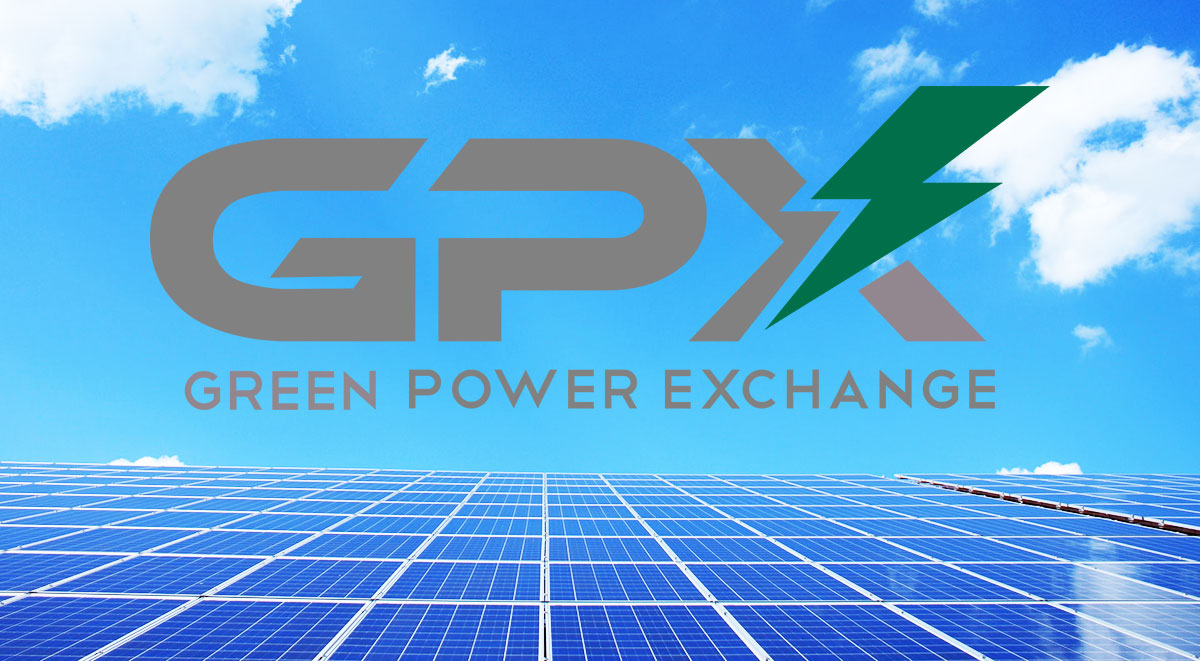 The physical infrastructure (i.e. low-voltage lines) for transferring electricity from solar plants and wind farms to households is usually installed on a local scale. It is simply distribution networks. So, if renewable energy power plant is connected to the grid of a local distributor, there are no physical obstacles for households or businesses to buy energy directly from those plants.

Moreover, households can trade energy between each other via the grid. If one family has excess energy from solar PVs installed on the house roof, they can simply sell this energy to their neighbours. Office buildings, communities and villages can trade energy as well.

One more issue of energy markets is that power production and energy trading is based on long-term forecasts and estimates of power consumption, so it’s not possible to reach the ideal power grid load balance. Green Power Exchange platform will be able to handle the issue with the grid load.

Each participant of the platform will need to have an installed smart meter, an electronic device that records consumption of electric energy. GPX will be checking the data from smart-meters and distribute energy between participants of the platform through automated execution of smart power purchase agreements (PPAs) that will be posted on to the blockchain.

PPAs in present format are complex paper documents with a variety of conditions built in. Such PPAs take significant amount of time to negotiate and implement. However, if PPAs are signed and executed automatically via smart contracts, the process can be simplified by many magnitudes.

There are different demands for setting up a PPA depending in which jurisdiction renewable energy power plant operates. GPX will provide standard templates for PPAs for each jurisdiction in which the platform operates. Producers can upload their own PPAs, but they are vetted to ensure compliance with GPX standards.

Once consumer needs an extra energy, the energy provider, who meets the buyer’s conditions, is founded via GPX platform. Then the system creates and executes PPA through posting the smart contract to the blockchain in a transparent manner. The payment in form of cryptocurrency is processed upon contract execution, which makes the process extremely convenient for both parties. No unnecessary intermediaries are needed.

Here are outlines of benefits of trading P2P energy trading:

To operate, the platform will implement two tokens: the primary-level Green Power Exchange Token (GPX) and the secondary-level Green Energy Transfer Token (GET).

GET token is a unique internal token of the platform, it acts as a form of a specified contract between buyer and seller, so GET tokens differ from each other.

First of all, they are jurisdictionally (location) dependent. This means that power sold, for example, in Germany cannot be consumed in France.

One GET token is equal to 1 kWh. Each producer issues the amount of GET tokens proportional to the amount of the electricity their project can offer.  The agreement to buy and sell GET tokens will be captured in smart power purchase agreement between producer and consumer, containing such info as the price per kWh, power delivery timeframe and the volume of power required. Upon these conditions fulfilled the smart power purchase agreement will auto-execute and be placed on to the blockchain.

During execution, the GPX platform monitors the energy distribution process by interacting with smart-meters and smart-inverters installed on the premises of energy consumers and producers. Upon the successful delivery of power to the consumer, the GPX tokens shall be auto-transferred to the producer and the GET tokens will be burned accordingly.

Whitepaper says: “Initially, GET token emissions will be performed on the Ethereum Network based on scaling needs, however, GET token emissions can also be performed in private networks. Such tokens will have the same characteristics as the GET tokens issued in the main Ethereum network, and in the future, they can even be transferred between public and private networks via the bridge nodes of the Green Power Exchange platform.”

GPX tokens will act as a common currency on the GPX platform. In order to purchase GET, consumers must use GPX. The GPX token will be ERC20 compliant and tradeable on cryptocurrency exchanges.

Implementation of the GPX platform on a global scale

GPX whitepaper says that implementation of a P2P trading platform in multiple jurisdictions is a regulatory and technological challenge. Every jurisdiction and utility has different processes. Taking this into account, initially GPX will focus on North America and Western Europe, the biggest markets with the most transparent rules and regulations that are also mostly deregulated. These markets represent nearly 30% of the world’s total electricity generation and consumption.

While there are many blockchain projects similar to Green Power Exchange, GPX may have an advantage due to securing exclusive deals with renewable energy developers in USA, Canada, Germany, Netherlands, Austria and Ireland. There are 62 solar PV plants ready to integrate GPX platform. The projects, exclusive to Green Power Exchange, span across North America and Europe and total more than 660MW. Whilst a portion of the portfolio is still under development, several projects are already operational.

After finishing development and implementation of a fully functionable platform across current projects, GPX plans to expand to Asia and other developing regions.

Later, not only green power generating plants will be able to sell energy on GPX platform, but households as well.

GPP will enable developers to structure financing for their projects at an early stage, providing an efficient and transparent way to raise funds. Thus, any individual can directly invest in a solar project. Additionally, large lenders such as investment banks and pension funds will be able to use the GPX platform, and the GPP Token as a way to issue long term financing for projects. Investments will be done via smart contracts, which will allow to avoid lengthy negotiations and multiple intermediaries, connecting projects with individual investors.

At the time of the conference (mid-April 2018) investments in GPX were available for accredited investors only. A public ICO will be conducted in the third quarter of 2018. The soft cap equals $6 million, but the team aims to reach the hard cap of $112 million.

On Event Horizon 2018 we saw a lot of other blockchain startups, which aim to develop a platform for peer-to-peer energy trading. Most of the startups have clear vision and plan how to implement their idea, but they still need to find energy generating projects which will use their platform. Some of the startups have already working product, but only implemented in a few local areas, or within only one region.

But GPX is standing out, as it has a lot of partnerships and agreements with leading generating companies in the largest markets in America and Europe. Also, the GPX consists of many members with strong business background in energy sector, which is crucial for platform development.