Jump Trade – a one-of-a-kind attempt at sports-based NFT games deployed in the “play to earn” module. The world’s first cricket-based blockchain application is being developed in the same. The marketplace is dropping on April 22, 2022, and the drop is set to host a series of known and speculated NFT concepts which we will look a brief peek into down below. 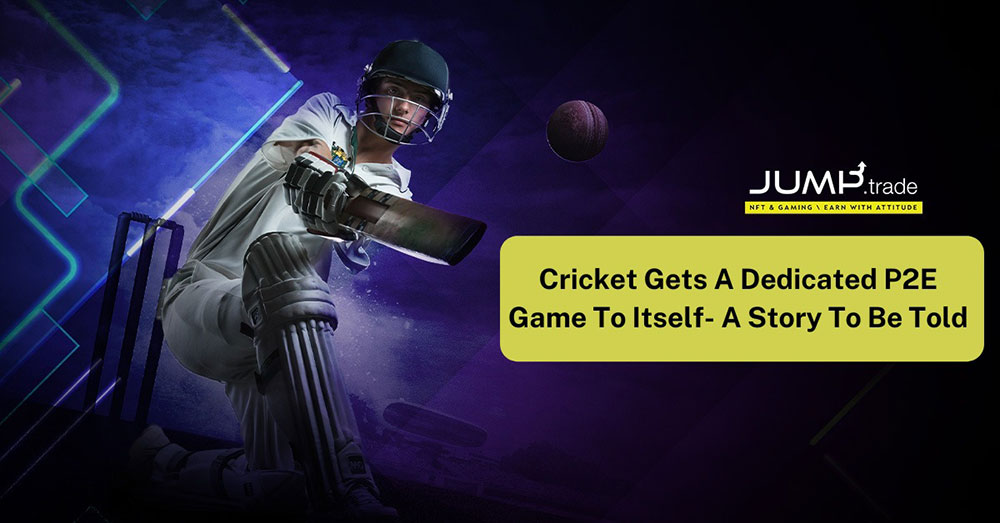 What can be expected on the Jump Trade marketplace – a prologue

It is a multiplayer interface that could possibly host metaverse, marketplace, and digital gaming assets to assist in completing tasks and competing in cricket matches. The interface is also set to host the metaverse ecosystem – a virtual meta cricket stadium – with a multiplayer interface. The roadmap presented in the marketplace has laid out the detailed plan of how the marketplace is going to function moving forward starting first with the launch of the cricket NFT drop launching on April 22, 2022.

The game is speculated to contain a multiplayer interface within the gaming guild. The game can contain a series of matches and leagues that come with their designated avatars of sports stars. These sports stars may be presented as avatar NFTs with upgradable skins, accessories, and commodities to distinguish their unique abilities and attributes.

How the release of the NFT drop is to be presented

With the pretense to the NFT drops that are happening at the end of the month, participants can expect a variety of cricket accessories to drop. These tokens can be availed on a first-come-first-serve basis as the platform mostly is gearing for a randomly-generated “super loot” box-based release of the NFTs.

People behind the scenes

The people behind the scenes making the dream team are – Guardian Link – the tech partner of the marketplace who are also evidently one of the biggest names in the no-code launchpad arena. The platform is hugely revered with good measure, they have been responsible for another highly successful marketplace – Beyond Life with multiple winning NFT launches under their belt and we can expect nothing less of splendid with the new venture into the gaming space. Based on their track record of the previous drops, they have facilitated a high-end marketplace – both primary and secondary, in which the trades have been smooth sailing.

The amount of love being received from the fans is really encouraging and admirable. Their love for the sport translates to their loud voices that are reflecting on their socials. Many trending hashtags and posts have been made in the wake of the marketplace announcement. This kind of support cannot be faked and it speaks to the distinct lack of representation for cricket. But, the good news for the fans is that Jump Trade has now been put on the spotlight and lives upto the expectations that it has set for itself.

Sports personalities behind the marketplace

The celebrity and actual sports legend endorsements also came ushering in to boost the confidence in the marketplace even more. Personalities like Mayanthi Langer – sports commentator and cricket icons Harbhajan Singh & Mithali Raj have shown their support to the platforms in their respective social outlets. This helps pique the interest of people who have been unaware of the platform too.

Metaverse and “play to earn” settings in gaming guilds

The tech implementations in gaming guilds are highly in demand, specifically, in the current climate. One of the most sought-after in gaming – NFT division. Companies – in the delivery regard to present a high-end interface are striving to the maximum. It is worth mentioning as keeping on top of the trends and being the forefront of integrating advanced concepts is what keeps the gaming industry two steps ahead of the game. The space for gaming in NFTs would continue to implement more and more bold ideas as they are being developed in real-time, just like the attempt from Jump Trade.

The sports-themed game blockchain applications that are specifically deployed in the “play to earn” setting are all the rage right now. Sports with worldwide participation, exposure and consumption – the likes of football and basketball.

In line with successful launches, the launch of Jump.trade NFT marketplace is specially curated with the fans of the sport in mind. It addresses the distinct lack of cricket-based platforms that are deployed in the P2E settings. Anticipated to break records within the sports-based gaming guilds because of its one-of-a-kind platform. The NFT marketplace for games can have another win under their forum. These games are built to incentivize gamers, optimize their time spent interacting with the platforms, and get rewarded for the trail through their online presence. There do exist many NFT platforms that play cricket-themed games in the currently available NFT marketplaces, but this scale of effort that took to create unique interfaces has been left unmatched.

How the marketplace is envisioned for the gamers

The platform has much to look forward to, though it is yet to be launched soon. Its well-laid-out roadmap envelopes what can be expected from the NFT drops on April 22nd as they are launched. We speculate a bit on what kind of NFTs could and would present at the marketplace and why participants should sign up to the marketplace to purchase them.

Super loot box – is set to launch a series of cricket generative punk NFTs – that could hold accessories and cricket assets like digital cricket bats, balls, skins, and even upgrades that are signed and authenticated by some of the biggest sports celebrities. The commodities can also be launched in a tier-based setting depending upon their uniqueness, scarcity, and the rarity – the numbers and the attributes they hold.

Expected NFT drops in the future

What can be expected to drop in a series of launches following the drop in April – within the platform, is the metaverse playground. It is said to be set up with a multiplayer interface. And a space where the players could potentially play with their assets and get incentivized. This can happen through exchangeable tokens for their engagement and how well they perform in the matches. The fans can participate in multiplayer battles and in the matches and eventually win prizes as tokenized rewards. A marketplace is also in the works in the near future gearing up for the investors and NFT collectors.

Be sure to check out the Jump trade marketplace launching on April 22 with a variety of NFT drops. Join the waitlist to get a chance to take away the drops from the “super loot” box. The sign-up process to the platform is fairly simple as you only need to subscribe to the platform, join the waitlist, follow the socials, and fund your wallets accordingly.