Digital assets have gained popularity over the last few years as Bitcoin and other cryptocurrencies came to fame in the mainstream investment space. Other digital assets, most notably nonfungible tokens, or NFTs, have gained traction and notoriety in 2021. If you’re unfamiliar with an NFT, it’s a digital file that, according to Forbes, “represents real-world objects like art, music, in-game items and videos.” So basically, instead of purchasing an item you can use in your office or home, you’re buying a virtual item. What makes NFTs attractive is they are limited in quantity, and therefore, appear more valuable unlike the plethora of cryptocurrencies in existence. And while NFTs may seem like a far-fetched idea, they are becoming more well known in art circles.

To measure where NFTs stand in comparison to physical art, we conducted a study where 1,000 respondents placed bids on a wide array of traditional art pieces and NFTs. Which form of art drew them in more? And which specific art pieces garnered the highest bids? Let’s find out where classics by van Gogh and da Vinci stack up against digital art.

Earlier this year, Malaysia-based CEO Sina Estavi, who’s in his 30s, bought Twitter founder Jack Dorsey’s first tweet from 2006 in NFT form. The price tag: nearly $3 million. He called his purchase “a piece of human history in the form of a digital asset.” Meanwhile, the world’s most expensive NFT, artwork made by the digital artist Beeple, was sold at auction this year for $69 million. The buyer: Indian entrepreneur, coder, and angel investor Vignesh Sundaresan, also reportedly in his 30s.

However, would it be fair to assume that younger generations are more interested and eager than older ones to jump in on this technology trend? 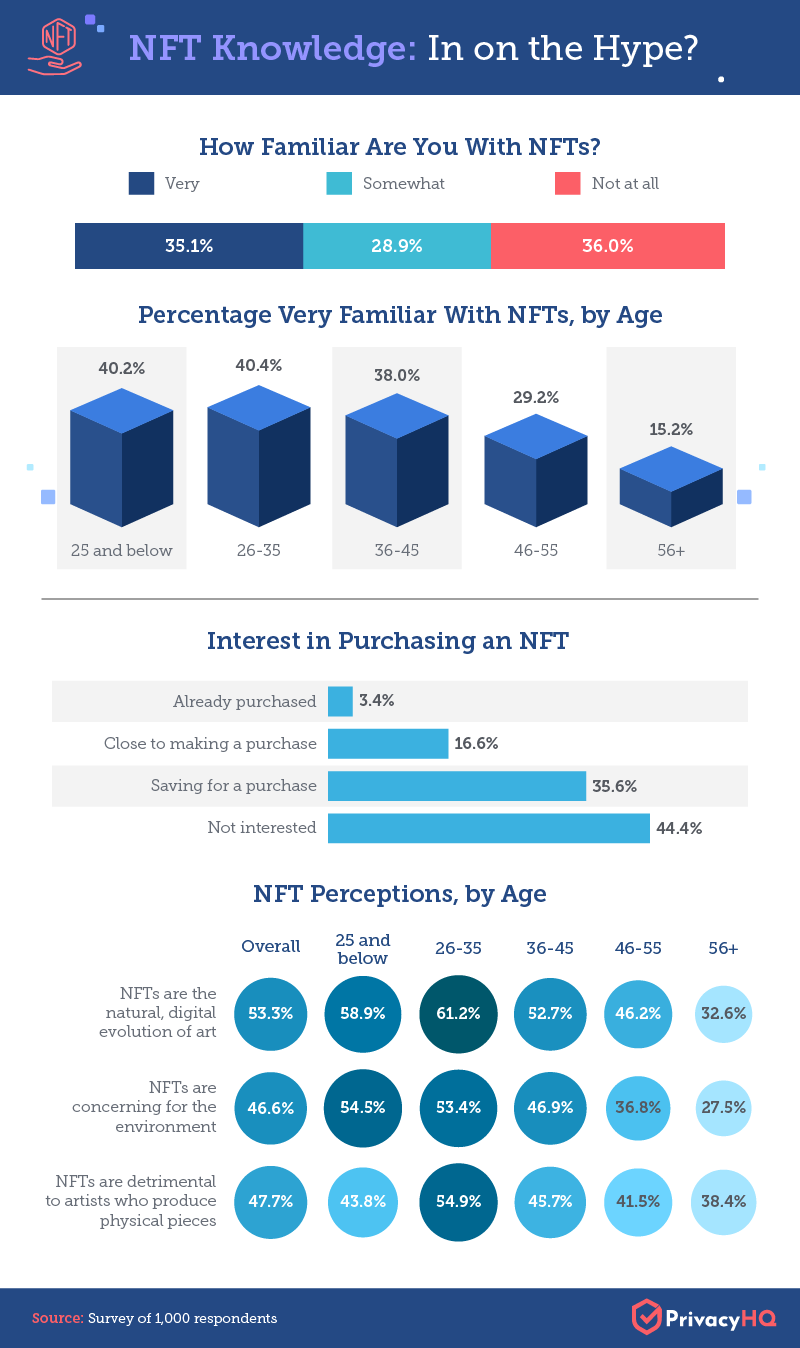 According to our research, the age ranges with the most knowledge of NFTs were 26- to 35-year-olds (40.4%) and those 25 and below (40.2%). And the 26-to-35 age group, in which both Estavi and Sundaresan fall, were most likely to call them “the natural, digital evolution of art” (61.2%). Generally, the more familiar with NFTs respondents were, however, the more concerned they were about the tokens’ effects on the environment and physical art spaces. These could be specific age or generation-related concerns as well, related to tech in general. Furthermore, respondents aged 26 to 35 were the only to believe it was more likely than not (54.9%) that NFTs negatively impact the creators of physical art.

When looking at whether respondents were looking into purchasing NFTs, a mere 3.4% reported they had already purchased at least one. However, 16.6% claimed they were close to making an NFT purchase, and 36.6% had been saving for one. Additionally, men were over 42% more likely than women to have already purchased or have plans to purchase an NFT. 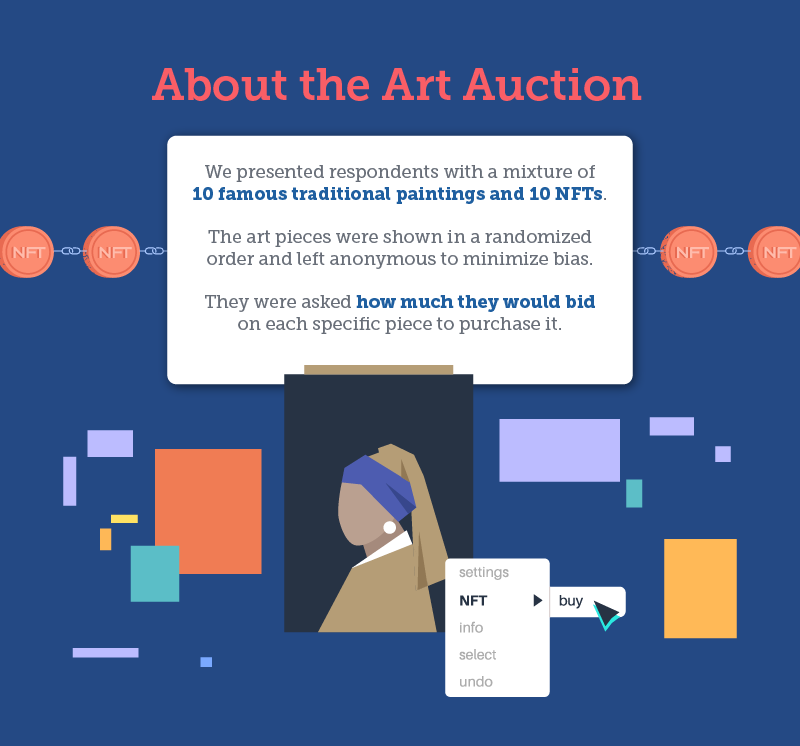 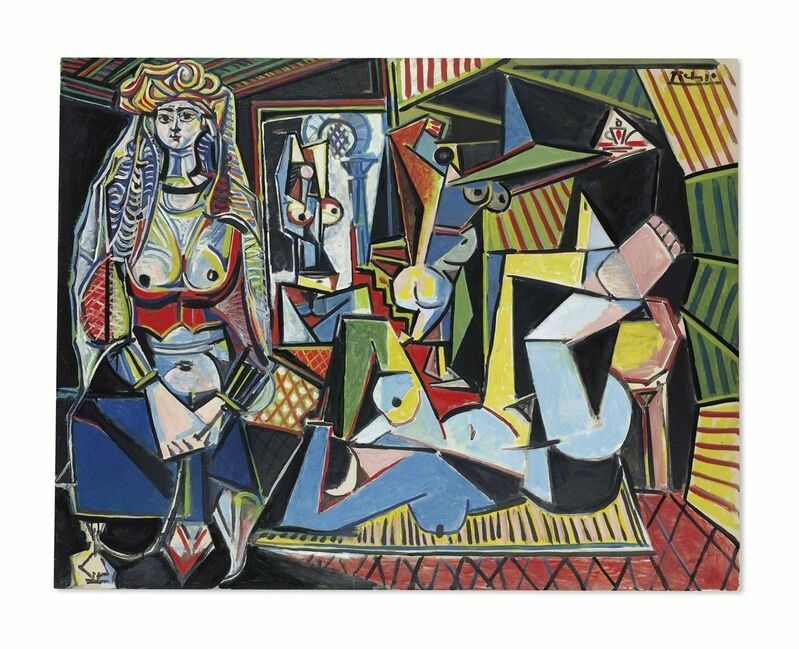 So, how would NFTs valued in the millions stand up against classic works by artists such as Pablo Picasso, Mark Rothko, Frida Kahlo, and Andy Warhol? Let us take a look. 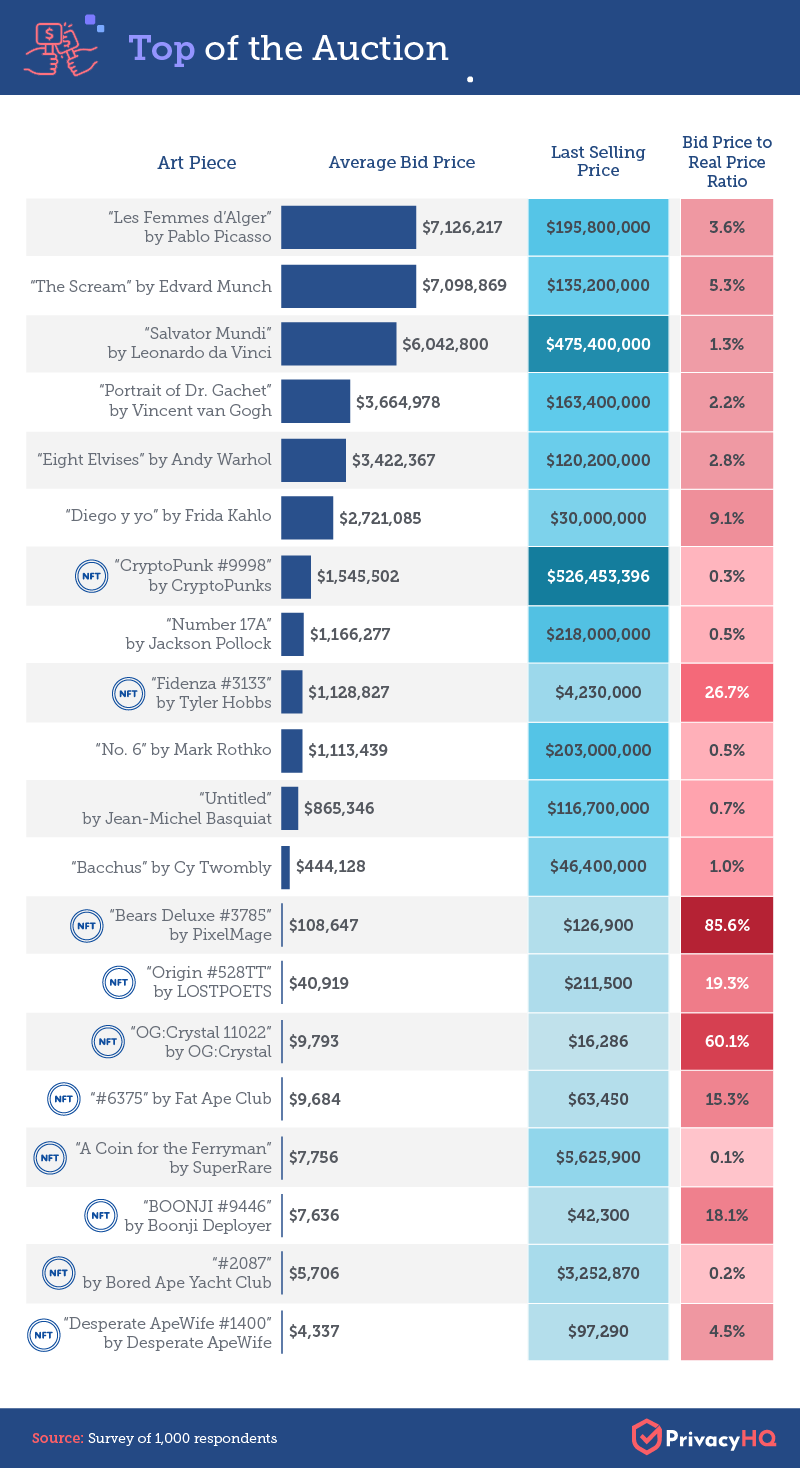 Art by Age and Gender

Unsurprisingly, the average real value of physical and digital artwork were vastly different and so was the average bid price, but NFTs are much younger than typical paintings. After all, the first NFT was minted in 2014 by Kevin McCoy. 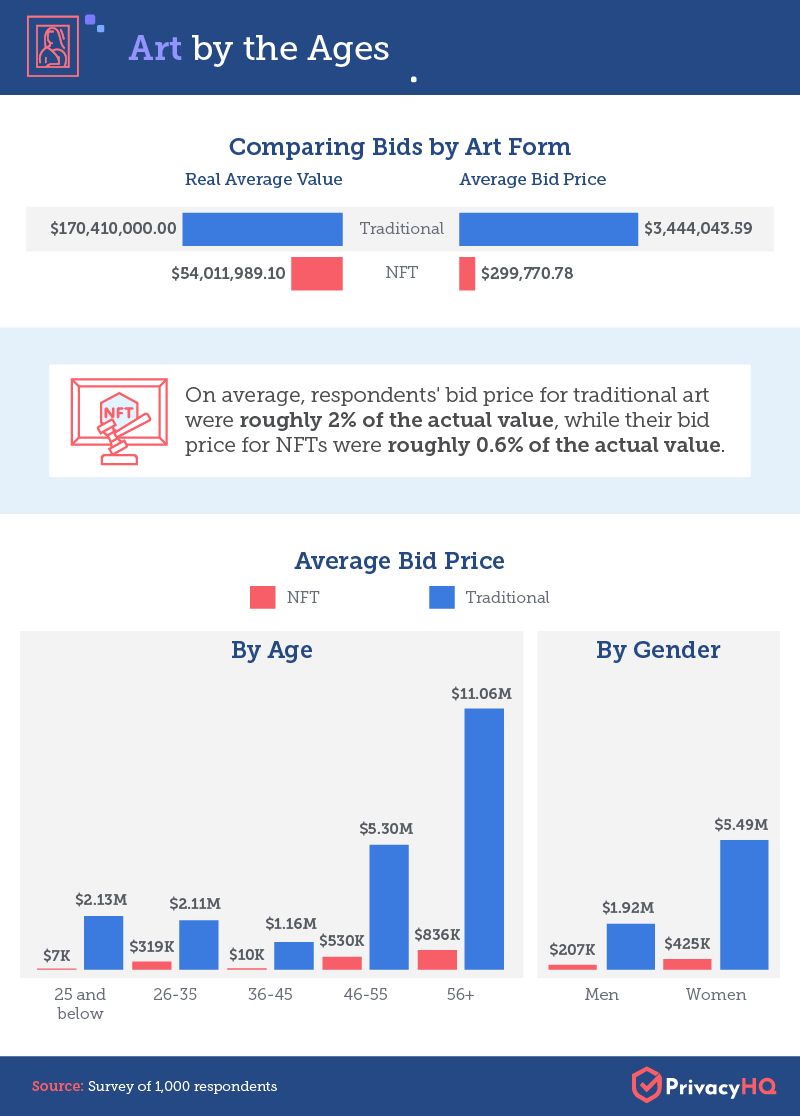 Bid values compared to actual values were also significantly less for digital artwork compared to physical paintings. Additionally, respondents who bid the highest for both digital and physical art were 56 years old and above, but that age bracket is also more likely than younger generations to have disposable income, according to a MarketingCharts.com 2019 study, and are willing to spend more money per transaction. When observing gender differences, women seemed to bid over two times more than men for both traditional art and NFTs, on average. This is somewhat shocking considering men were more likely to have already purchased or have plans to purchase an NFT. The trend for owning NFTs among women and older generations may change as the digital assets continue to gain popularity in the years to come.

For now, where were the favorites and least favorites for different age groups? 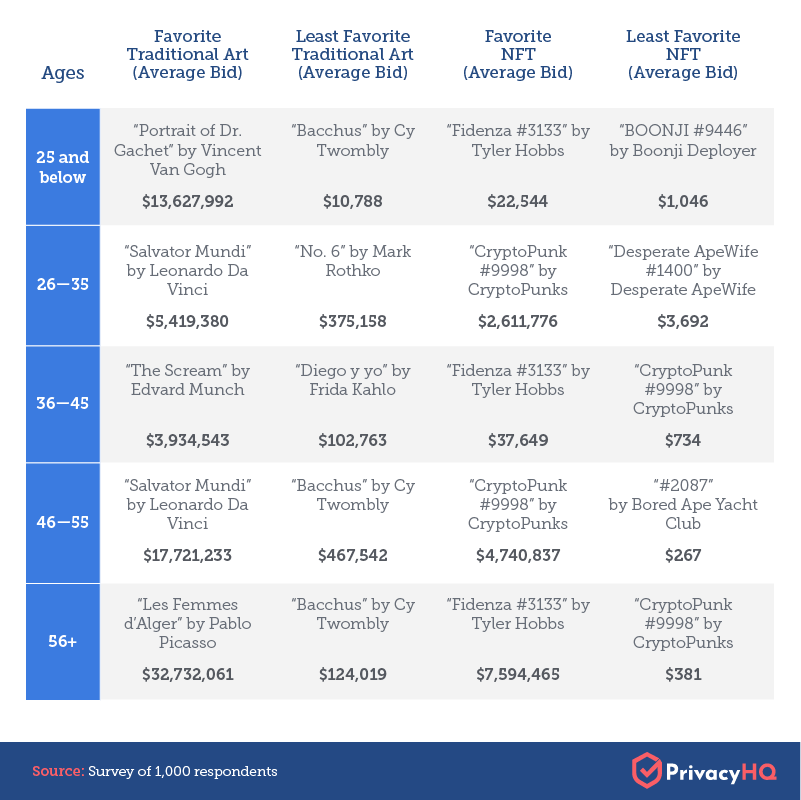 When it came to traditional art favorites, age groups 26 to 35 years old and 46 to 55 years old seemed to think alike, with their highest average bids going toward da Vinci’s “Salvator Mundi.” However, the prices they were willing to pay were significantly different; the average bid of the younger group was over three times less than the older. “Bacchus,” painted by Cy Twombly, was the least bid on traditional art piece among three of the five age groups. Controversy existed when it came to NFTs. While age groups 26 to 35 and 46 to 55’s highest bid toward NFTs was on CryptoPunk #9998 ($2.6 million and $4.7 million, respectively), age groups 36 to 45 and 56 and above saw it completely differently (bidding $734 and $381, respectively).

NFTs on the Rise

As evidenced by this study, NFTs are changing the art landscape. We’re only at the beginning of this massive movement, and NFTs are starting to pick up steam across demographics as well.

For more on how to protect yourself in the digital world and how to protect your online purchases, such as NFTs and digital assets, bookmark Privacy HQ and check back often. We’re the best place for your all-in-one privacy knowledge base, internet security tips, and helpful product reviews, so you can stay safe both on and off your screens.

We selected ten of the most famous traditional art pieces and ten NFTs belonging to some of the most popular collections (according to www.opensea.com). We ensured that each piece of art was painted/designed by a different artist to eliminate bias. Using these images, we surveyed 1,000 respondents via Amazon MTurk. 57.1% of these reported as men, 42.6% reported as women, and the remaining 0.3% reported as nonbinary. Additionally, the average age of respondents was 38.7 years old, with a standard deviation of 12.6 years.

The main limitation of this study is its reliance on self-report, which is faced with several issues, such as, but not limited to, attribution, exaggeration, recency bias, and telescoping.

Are you intrigued by the NFT space or just a fan of art overall? Are the people around you similarly interested? We encourage you to share our findings with your family and friends—we only ask that you do so for noncommercial use and provide a link back to this original page so contributors can earn credit for their work.