We’ve all had moments of wishing for retribution when someone inconveniences us: Perhaps you get cut off in traffic and you hope that person goes on to have a bad day. With a social credit system, nuisances like this could be punishable, and you could even be rewarded for allowing a car to merge in front of you.

In this study, we looked at how Americans would construct a social credit system. What should be included? What would potential consequences be? And is it even a good idea in the first place? To answer these questions, we asked 1,164 Americans for their thoughts on social credit systems and then asked them to build one. Read on to find out the results.

In this pandemic era, we are often confronted with the question of privacy versus public safety, with many restaurants, theaters, and even office buildings now requiring proof of vaccination or a negative COVID test. To begin this survey, we gauged Americans’ sentiment on sharing personal data with others. 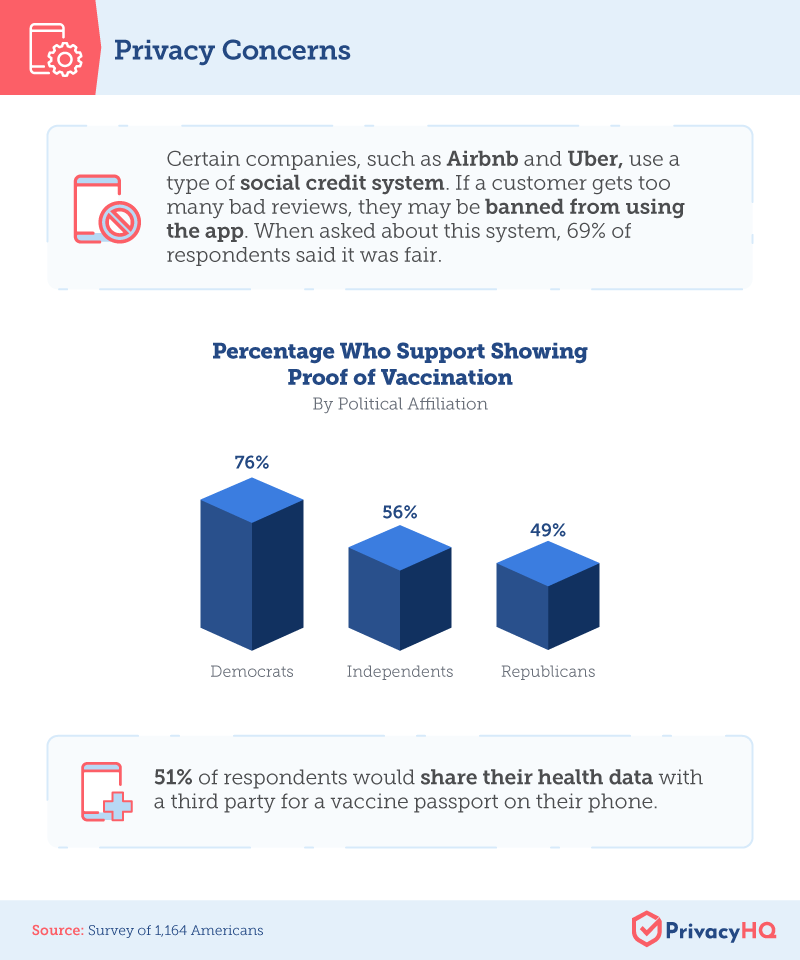 Overall, 63% of respondents were willing to share their proof of vaccination, but when broken down by political affiliation, this percentage varied widely from 76% for Democrats to less than half for Republicans. This is not a new development, though, for nearly a year Americans have disagreed over the constitutionality of requiring proof of vaccination. Supporters say it reduces transmission of COVID and is necessary for ending the pandemic, opponents say it violates their right to privacy.

Even less popular than simply showing proof of vaccination was sharing personal health data with a third party for a vaccine passport. Some applications have been created so that users can present their vaccination status on their phone instead of carrying around their card. Overall, slightly over half of the respondents were willing to give their health data to a third party—although that figure was just 1 in 3 for Republicans. For those that are willing to show proof of vaccination, just not give their information to a third party, many places accepting a vaccine passport will also accept a vaccination card with a matching ID.

Additionally, we asked respondents how they felt about certain companies tracking their actions and behavior while using their services. For instance, Uber and Airbnb allow drivers and hosts to give their customers a rating. Customers with too many bad reviews may be prevented from using the service. Sixty-nine percent of respondents felt this was a fair practice.

Bringing Social Credits to the U.S.

With the majority of Americans upholding companies’ rights to monitor and punish behavior, we moved on to ask respondents how they felt about a widespread, comprehensive social credit system in the United States. 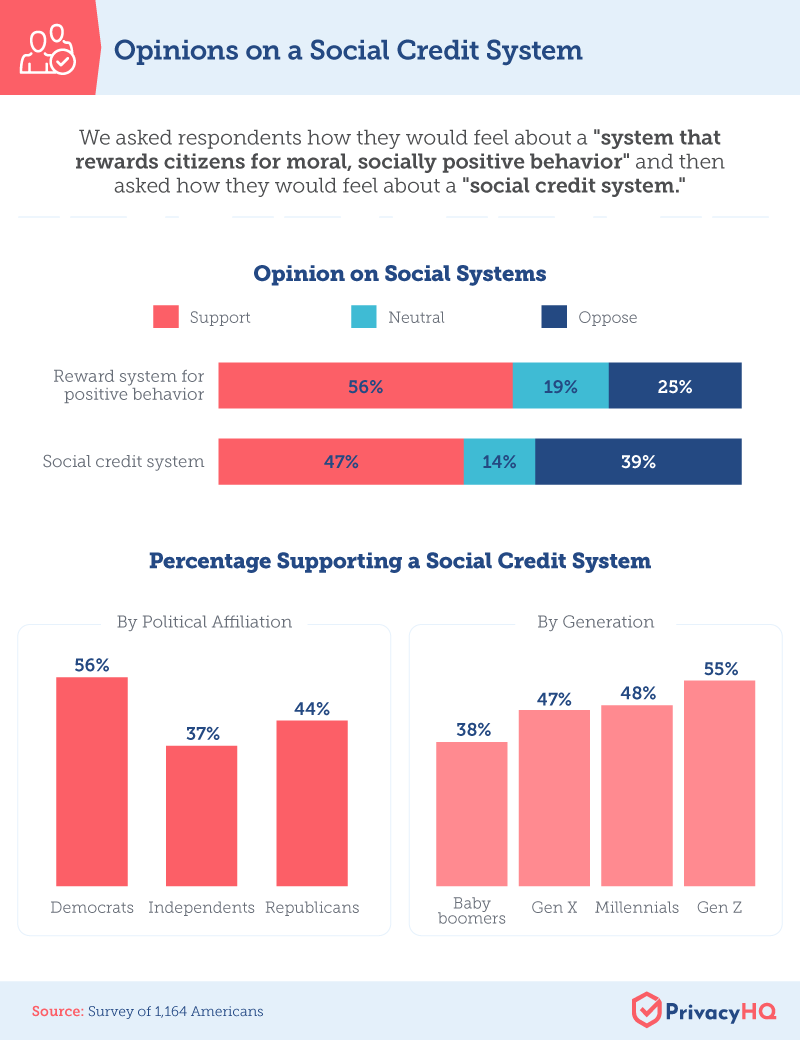 Republicans and independents were also more likely to say they would stop using Facebook, Instagram, and Apple products if they discovered they were being tracked. Furthermore, we had a number of survey-takers go beyond filling out the multiple choice question and write-in to tell us they believed they were already being tracked by these entities.

The Good and the Bad

Digging deeper, we wanted to know what people felt the specific pros and cons of a social credit system would be. 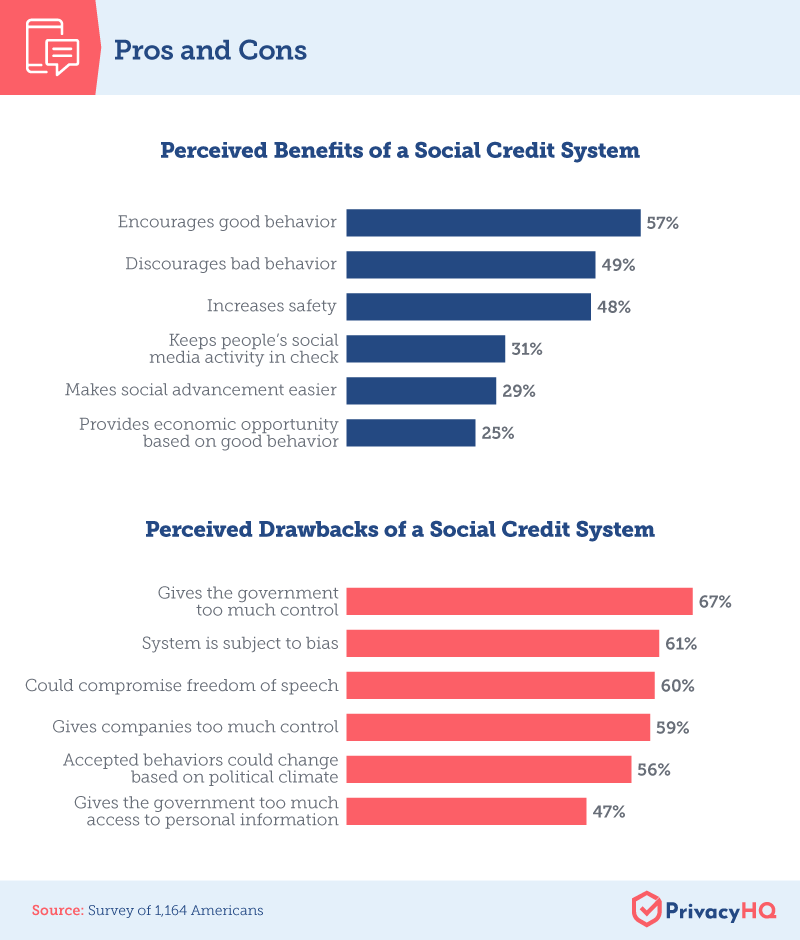 When looking at the benefits, 57% believed social credits would encourage good behavior, while 49% believed they would discourage bad behavior. Meanwhile, 13% of respondents answered that there were absolutely no benefits to having a social credit system.

Moving on to the problems, one of the primary perceived drawbacks was the fear of power being congregated in the wrong hands. Sixty-seven percent feared that a social credit system would give the government too much control, while 59% had the same concern about companies. Gen Z was the only generation to not have government control as their top concern, instead worrying about impacting citizens’ freedom of speech.

After ascertaining their opinions, we wanted respondents to build a hypothetical social credit system for the United States. Due to the current stigma associated with these systems and a lack of enthusiastic support, it’s likely that if the U.S. were to implement one, it would need to offer bonuses for people to participate. We asked respondents what might entice them to register. The top three incentives were: free health care, access to lower interest loans, and universal basic income.

Continuing with our hypothetical construction, respondents then selected the information they considered vital to a social credit system. Unsurprisingly, criminal activity took the top two spots, but an individual’s carbon footprint was interestingly the third most popular response. Calculating a carbon footprint requires tracking numerous aspects of one’s life, including travel habits and energy consumption. 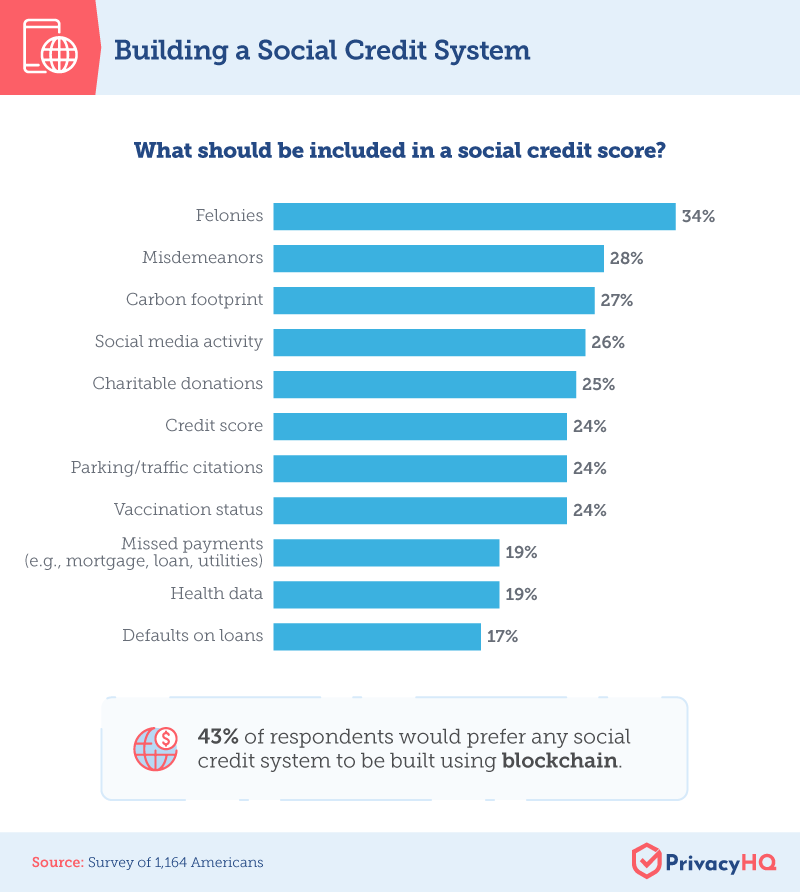 Other popular factors to be considered included social media activity, charitable donations, and even vaccine and health data. We also asked respondents what information they would be willing to share about themselves. Respondents were most open to sharing their criminal background (39%) and their employment history (37%). And while 32% of respondents were willing to share their social media activity, only 26% felt it needed to be included.

For the sake of comparison, the world’s largest social credit system is operated by the Chinese government, which tracks all sorts of information about its citizens’ behavior, including poor driving incidents and posting fake news on social media. 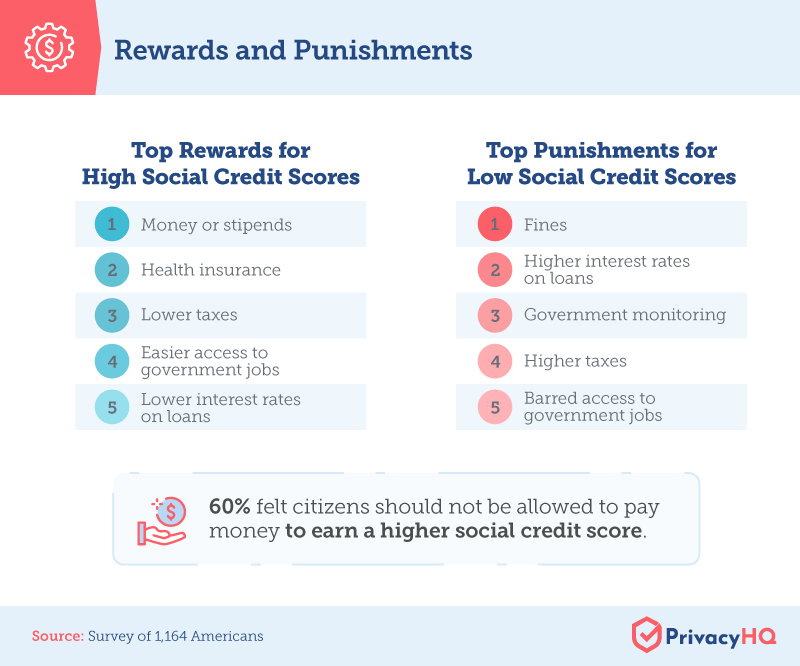 Taxes, interest rates, and access to government jobs also appeared on both lists. Many felt those with high scores should have low taxes, lower interest rates, and easy access to government jobs—while those with low scores should garner the opposite. Equally interesting was what did not end up in the top five. Only 9% of respondents felt that jail time was an appropriate punishment for a low social credit score.

The Future of Social Credit in America

While many Americans were accepting of small scale behavior credit systems implemented by individual companies, substantially fewer supported a nationwide social credit system. A common complaint was that it would give too much control to both the government and private corporations. When asked to build their own system, respondents generally preferred including criminal activity and environmental impact over financial factors. But when looking at the consequences of high and low scores, financial rewards and punishments were the most popular.

With all the discord surrounding social credit systems in the United States, it’s unlikely that one will be implemented any time soon. But that doesn’t mean there aren’t people trying to access your personal data. It’s important to be constantly vigilant about keeping your information safe, secure, and out of the wrong hands. To learn more about personal data security, visit PrivacyHQ.

Using Amazon Mechanical Turk, we asked 1,164 Americans for their opinions on a social credit system in the United States. Our respondents included 182 baby boomers, 253 Gen Xers, 562 millennials, 161 Gen Zers, and six respondents that did not specify their age. For the party affiliation breakdowns in the study, we looked at 582 Democrats, 271 Republicans, and 243 who identified as independent. An additional 68 respondents identified with another party but were not included in party analysis due to their small sample size.

These data were gathered through a survey. To ensure that respondents took our survey seriously, they were required to correctly answer an attention-check question. There are some limitations to self-reported survey data, such as selective memory, telescoping, and exaggeration. Data were not weighted nor were any statistical tests performed. This is simply an exploration into Americans’ thoughts on social credit systems.