ChocoDoge, an NFT Gamefi project announces the launch of USCD, the seigniorage stablecoin on the dogechain.

Road Town, British Virgin Islands, Sept. 07, 2022 (GLOBE NEWSWIRE) -- ChocoDoge, an NFT Gamefi project announces the launch of USCD, the seigniorage stablecoin on the dogechain. Stablecoins give crucial stability to investors and users in the volatile crypto market, notably in the Defi sector. Currency-linked stablecoins are pegged to 1 USD and held by centralized third parties, which contradicts the fundamental principle of the world's first cryptocurrency, whose primary purpose was to create an untouchable, decentralized monetary system. 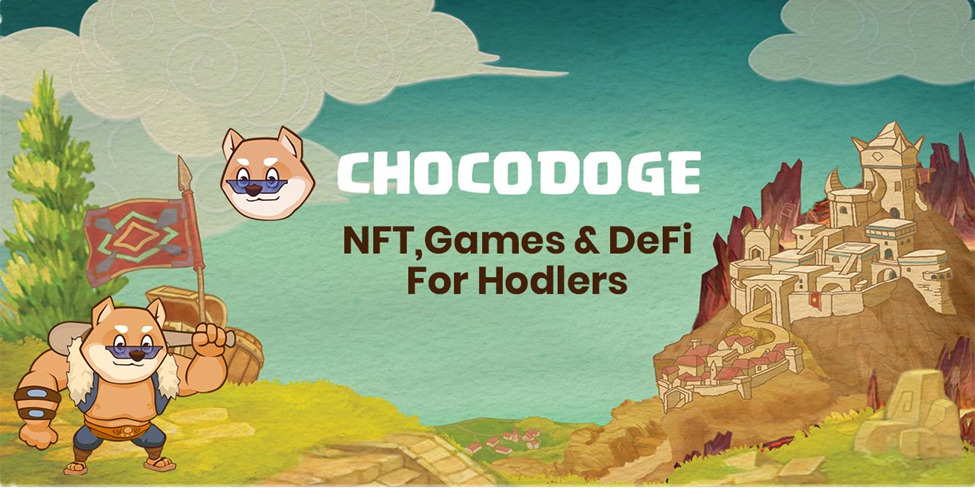 Innovative algorithmic currencies maintain an eternally constant value via the use of unique algorithms and codes that change their total quantity and do not require a reserve to preserve their fundamental value.

The challenges that are there in the GameFi Industry

Traditional yield farming projects depend on the trust of their users. Also, if something goes wrong on these platforms, either subjectively or objectively, it will start a snowball effect that will make the protocol less appealing and as a result in the end majority of these platforms tend to fail.

Most GameFi projects use a model to make sure their big investors and venture capitalists can break even as soon as possible (and thus gain their trust, leading to more money for the development). Most of the time, when the investing phase starts, this leads to quick selling.

Sometimes the pre-mint/pre-sale amount is so big that it throws off the game's whole economy. The big investors and venture capitalists take their money and leave, leaving the developers and players with a broken, unfinished game and no money to finish it.

The vision behind ChocoDoge’s approach

ChocoDoge has decided not to chase profits or useless metrics like a high TVL or an unreasonable APR. The goal of the development process is to come up with a protocol that can be used for a long time, has a good return on investment, and is safe.

With the mindset of a game studio, most of the money made from the protocol will go to help make games. ChocoDoge sticks to the roadmap's development milestones and holds events and incentive programs to help get the word out about the products.

As the first GameFi project to use the Seigniorage Stablecoin Algorithm on Dogechain, ChocoDoge is committed to always watching and improving the economy in ChocoDoge's ecosystem to avoid losing control over inflation, which is the main problem with most Gamefi projects on the market.

In terms of security, ChocoDoge will be audited by the leaders of the market. This will make sure that the smart contracts are secure and protect users from any risks that might come up. There will also be a program to reward people who find bugs.

In terms of technology, ChocoDoge will have a time lock. This means that several epochs must pass (four in this case) before the smart contract can be changed. There won't be a mint or a withdrawal button on the Masterchef address.

In terms of being open and honest, the project's documentation at docs.chocodoge.dog has all the information about it, including technical details, the address of the smart contract, and the tax rate. Changes to the terms and conditions that are important will also be shared on official social media pages.

There are three types of tokens. Let us have a look at them:

Also, it's important to remember that even though USCD actively pegs through the algorithm, that doesn't mean it will always be worth 1 USDC because it is not collateralized. USCD is not a stablecoin backed by either cryptocurrency or fiat money.

ChocoDoge Share are one way to figure out how much the ChocoDoge Protocol is worth and how confident investors are that it will keep USCD close to its peg (CD). Whenever an epoch grows, the protocol makes USCD and gives it out proportionally to all CD holders who have put their tokens in the BANK.

The main purpose of ChocoDoge Bonds (USBD) is to encourage changes in the supply of USCDs during a period of epoch contraction. When the TWAP (Time Weighted Average Price) of USCD falls below 1 USDC, USBD are made and can be bought with USCD at the going rate. Taking USCD tokens out of circulation (deflation) makes the price of one USDC go up when they are traded in for USBD.

When the price goes above the peg in the future, these USBD can be traded for USCD, and plus an additional incentive the longer they are held above the peg. When USCD is above the peg, this means that there is inflation and pressure to sell, which pushes it down toward 1 USDC.

Any CD token holder (as long as the $USCD TWAP value is greater than $1 USDC) can stake their CD tokens here to win USCD at the conclusion of each epoch. The Hedge Fund will use the freshly created USCDs for operational funds, while the Bank will use them as incentives whenever there is an expansion.

At the start of each new epoch, the BANK will conduct a sweep to verify the availability of USCD in its entirety.

What the BANK does next depends on the state of the USCD market:

If the initial value of USCD is less than 1 USDC ($1) at the beginning of a cycle, then the BANK will stop minting new USCD and USBD will become available for purchase. Only in tandem with the USCD can USBD be purchased.

Each USBD token represents at least one burned USCD token whenever the price falls below the peg. When exchanging USBD for USCD, use the following exchange rate:

With p = USCD's price at the time of the swap.

By comparing the current price of USCD to 1.3 and selecting the lesser of the two values, consumers are guaranteed to be able to exchange USBD for USCD with a maximum bonus percentage of 69% using the method mentioned above.

ChocoDoge is committed to avoiding profit maximization and the pursuit of meaningless metrics like high TVL and APR. The purpose of the development phase is to provide a method that can be maintained for the long-term and has adequate return on investment and safety. They have been doing an excellent job of keeping to the schedule of the roadmap's milestones and coming up with events and incentive plans to help move the products. They are committed to constantly monitoring and bettering the ecosystem's economy to avoid losing control over inflation, the major weakness of most GameFi projects on the market, and they were the first to use the Seigniorage Stablecoin Algorithm on Dogechain, which is why they deserve support.

Disclaimer : There is no offer to sell, no solicitation of an offer to buy, and no recommendation of any security or any other product or service in this article. This is not investment advice. Please do your own research.