The event started with an opening speech from Wright Wang, Marketing Director of MicroBT, welcoming all the participants at the show, emphasizing the importance of this event for the future of mining industry, and continued with an in-depth explanation of the technical principles and system architecture. He also noted that MicroBT is making bold steps in introducing new solutions to miners, and the development of hydro cooling systems is a strategic direction of the company, mentioning that the Whatsminer M53 series has great features, including near-zero water consumption, stable operation, modular design, high density, and low-noise, low failure rate, and maintenance cost.

Distinguished guest, Mr. Benninghoff in his speech underlined that the presented solution by MicroBT and Heat Core will revolutionize bitcoin mining by integrating electrical energy, thermal energy, and digital mining and more importantly can contribute to the grid demand response, utilizing the heat generated by the chips, and be powered by stranded methane to reduce greenhouse gas emission to battle global warming. He also stated that there is a growth in the number of high-ranking officials who strongly believe in the contribution of the blockchain and digital currency mining industry in people's daily lives.

Mr. Jinke Liu, Director of Business Development at Heat Core, said that the newly presented integrated solution would save crypto miners from problems such as unstable operations in areas with high temperatures and humidity, ensure stable mining performance, and reduce operating costs, which will increase profitability. In parallel, he said, this solution will bring prosperity to the traditional industries and provide heat energy to various applications including residential/commercial heating, agriculture (greenhouse and hydroponics), aquacultures (hatcheries and fish farms), as well as heat-demanding manufacturing industry.

Foundry's Kevin Zhang emphasized the active role and bold commitments of MicroBT to meet the requirements of the ESG carbon-neutral concept through introductions, such as advanced solutions, and congratulated senior leadership of MicroBT and Heat Core on their great achievement for the industry.

During the event, Wright Wang, Marketing Director of MicroBT, introduced a new product, the model Whatsminer M50S+, and released its specifications. According to him, the new WhatsMiner M50S+ boasts 136 terahash/second (TH/s) of computing power at 24 joules per terahash (J/TH) of power efficiency and runs on 3264 watts(W), and up to 8% higher hash rate than previous models.

Titans of the industry such as Foundry, Duke Energy, CleanSpark, Bitfarms, Synos, and the ceremony was also privileged by the presence of Rep. Kerry Benninghoff, Majority Leader for the Pennsylvania House of Representatives.

Equilibrium between production and consumption of electricity for the grid demands growing public awareness. Though highly promoted renewable energy resources such as wind and solar power, they come under criticism for putting the gird up for test. Energy-intensive Bitcoin mining has been branded with a less positive reputation. However, WhatsMiner-HeatCore strives to renovate the aged stereotype with its technical expertise in its new Bitcoin mining paradigm, sporting a wide range of overclocking-underclocking power efficiency up to 70%, voltage, and frequency, which poses itself to be a better demand response player boosting grid stability.

The newly published White House report, Climate and Energy Implications of Crypto-Assets, shed light one of future paradigms for responsible cryptocurrency mining, "The crypto-asset industry can potentially use stranded methane gas, which is the principal component of natural gas, to generate electricity for mining." Heat Core debuts its brand-new product Methane Green to better manifest its visions for environment-friendly mining. Tailored to the flaring gas-powered mining scenario, Heat Core supplements the classic mode with an outdoor and waterproof design with IP54 protection and consumes as little water as none, which juxtaposes itself as the best mining choice for flaring gas, landfills, biogas, animal husbandry, sewage processing, extending to scenarios like agricultural processing.

Redefining Boiler for All Heating Scenarios

Heat Core's Integrated Energy and Hashing System (IEHS) takes a water-cooling method to better harvest heat from running chips, bringing the thermal efficiency up to 95%, which makes it a robust supplementary to the existing heating industry. With a duo product of hashrate, Heat Core further differentiates itself from run-of-the-mill boilers, transforming itself as a true and only integrated system of electrical energy, thermal energy, and computing power. A full-range product line confirms a spectrum of heating scenes, be it small or massive - from household, commercial complex, and all the way to centralized district heating. Applications in agriculture, aquacultures, oil fracking, and even desalination are self-evident in Heat Core's ESG carbon-neutral visions to a better climate.

Founded in 2016, MicroBT (www.MicroBT.com) is a technology company based on blockchain, focusing on the R&D, production and sales of integrated circuit chips and products, and provides high performance computing system solutions and technical service.

WhatsMiner(www.whatsminer.com) is a leading brand of mining hardware and chip design developed by MicroBT. As one of the most efficient and cost-effective mining brands on the market, WhatsMiner is widely used in retail and institutional mining by customers around the world.

HEATCORE INC is a services provider and operator of Integrated Energy and Hashing System (IEHS). By integrating electrical energy, thermal energy and computing hashrate, its system effectively improves energy efficiency and reduce carbon emissions. Heat Core is MicroBT's Strategic Partner and cooperates on design and R&D of a full spectrum of heating scenarios.

Titan Energy Park is in Bellefonte, Pennsylvania, which cooperated with Heat Core, on the heat recovery for hydroponic, aquaculture systems and space heating. 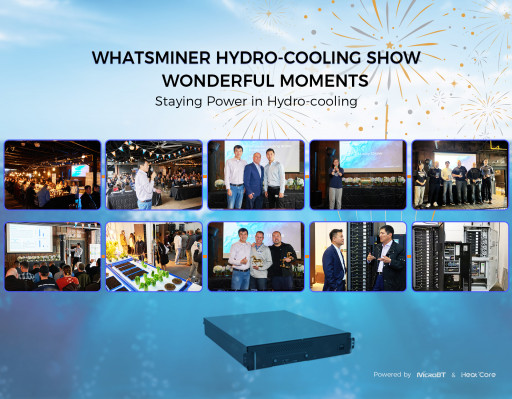