Auckland, NZ, Sept. 27, 2022 (GLOBE NEWSWIRE) -- Pi Network was founded by Nicolas Kokkalis and Chengdiao Fan. Both Kokkalis and Fan have doctorates from Stanford University in the US, where Kokkalis has a degree in computer science, and Fang has a doctorate in computing anthropology. The concept of Pi Network first appeared in 2019 when the app launched. 2020 is the year the network's testnet launched, with the number of active pioneers has reached 23 million miners and still expanding today.

Pi uses something called a stellar consensus protocol. This allows certain users on the network, called nodes, to validate transactions on a distributed ledger and reach a consensus on the order in which new transactions are recorded on the ledger. Nodes form groups of three to five trusted people known to each user of the network. Then, in theory, they build a network, preventing fraudulent transactions because transactions can only be validated if trusted nodes approve. At the end of December 2021, the mainnet was launched, but no exchanges listed the coin.

An alternative solution with Pi Connect

But there is an alternative solution for this problem, PiConnect - which aims to solve the existing limitation on Pi Network crypto, including mining rewards and liquidity provision. Furthermore, the application provides users with information about the price and exchange rate between Pi for other mainstream cryptos. PiConnect application will be followed by three crucial rules: Convenient, High safety, and Flexible. 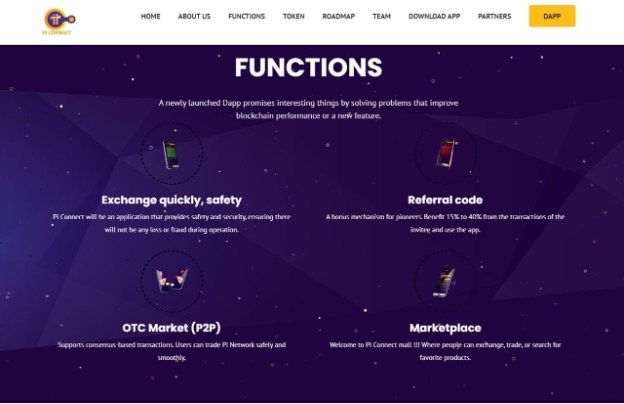 Pi Connect was founded by CEO Peter Sumich - a former Head of Business Development in International Relations and Development at AUT University and Head of Planning & Finance and was a contractor for the New Zealand Institute of Chartered Accountants (NZICA) team with many experts in the fields of Blockchain and Dapp development from New Zealand.

The potential rise of Pi Network is unmeasurable and is a breakthrough in technology. PiConnect team decided to build a platform that can be converted like Binance for Pi users on Blockchain. With PiConnect, the team can ensure that the users of Pi Network can perform interoperable exchanges with other blockchain networks such as BNB Chain, Etherium, Matic, etc., with fast, cheap, and secure criteria. Also, PiConnect delivers many functions other than bridging with Blockchain, such as farming and staking, launchpad platform, lending, auction, marketplace, etc.

PiConnect aims to be the first practical platform for Pi Network in 2022. With many features that can solve Pi Network's dilemma, Pi Connect can hold a lot of promise and is supported by the Pi Network community around the world, which is growing day by day.