BERLIN, Sept. 07, 2022 (GLOBE NEWSWIRE) -- The cryptocurrency market has catapulted to new heights over the past few years, prompting a significant rise in the demand for stablecoins. As a result, the market's most popular stablecoin, Tether USD, saw its market cap grow twenty-fold to over $82 billion in the second quarter of 2022.

The demand has also led to the spectacular growth in projects experimenting with other approaches to stability. The most infamous example is Terra Luna, which took a pure algorithmic approach. However, as has been widely reported, Terra Luna went on to collapse for a number of reasons, the primary of which was the inherent flaws in a pure algorithmic model.

TheStandard.io is from the team behind one of the oldest bitcoin exchanges, Vaultoro.com, and proposes a new global standard for decentralized stablecoins backed by tokenized physical assets as well as crypto assets. TheStandard.io uses an over-collateralized model in which users 'lock up' assets in individual smart contracts called 'Smart Vaults'. The DeFi protocol then allows users to borrow against these assets by minting new stablecoins pegged to any fiat they want at zero interest. Like any loan, government inflation decreases the value of their liability over time.

As a result, TheStandard.io eliminates the need for a centralized entity to maintain a peg and leverages inflation in favor of stakers.

"I'm thrilled to be advising TheStandard as they build a system to unlock the massive potential liquidity of hard assets such as precious metals. By using these as reserves to back over-collateralized stablecoins in any fiat currency, their system combines the safety of owning gold with the liquidity of bank deposits."

"Patri Friedman is a true visionary, bringing startup cities and seasteading to life. He comes from a family whose legacy is very much aligned to the philosophy and goals of The Standard Stablecoin Protocol. Individual liberty, backing currency with rare assets, and market forces as governance."

Patri Friedman will help The Standard DAO create the blockchain infrastructure needed for startup cities to have functional, central bank independent currencies backed by rare assets. He will also help build connections with other influential thinkers, VC's and entrepreneurs in this exciting space.

A Roadmap to a New Standard

TheStandard.io will first launch sEURO, a stablecoin which will maintain a value of 1 EUR. This launch will happen in the following stages called Operation Deep Liquidity:

The Initial Bonding Curve Offering will incentivise participants with up to a 20% discount when purchasing the first sEURO stablecoin, allowing the build-up of the Protocol Controlled Value (PCV). The concept of a bonding curve is to enable the build-up of reserve assets in exchange for the minting of sEURO at a discount for early participants. Tokens that can be initially converted into sEURO are Ethereum, PAX gold, wrapped Bitcoin and Matic.

The second stage focuses on building up deep liquidity for the trading pair sEURO/USDC (or another pegged stablecoin). This was inspired by Olympus DAO, allowing the protocol to own liquidity in the pools rather than renting it from yield farmers. Users deposit their sEURO and USDT into The Standard DAO's bonding contract which will be locked in a Uniswap liquidity pool. The longer the bond maturity, the higher the yield. The aim is to ensure deep liquidity and stabilize sEURO whilst continuing to reward early participants.

Finally, the DeFi protocol will also launch with a membership/governance token called TST (The Standard Token). Users can also stake TST to earn rewards which originate from the yield earned by the DAO when placing the liquidity from the PCV into safe yield farming activities. Users will be able to vote on where and how much to allocate to a specific activity.

Find out more about this three stage process here.

TheStandard.io is pioneering a new stablecoin infrastructure for the cryptocurrency market. Its vision is for the creation of a framework that enables stablecoins to represent every "fiat currency on Earth", a milestone no other stablecoin has been able to achieve thus far. This ambition is evident in its brand, with 'The Standard' being a reference to the infamous 'Gold Standard' which created a currency full-backed by gold held by the State.

TheStandard.io is driven by veteran cryptocurrency enthusiasts who make up the pioneering team. They include Protocol Lead Joshua Scigala, co-founder of Vaultoro.com (one of the world's first Bitcoin exchanges), Philip Scigala, CEO and co-founder of Vaultoro, who first entered the space in 2010, Ecosystems Operations manager Ana Valdes, a master in foreign affairs, and Head of Engineering, Simon Morley, CTO of Vaultoro.com.

To read more about The Standard DAO and its mission to reshape the stablecoin space, visit their website here.

Join The Standard community on Telegram

Connect with The Standard on LinkedIn

Join the conversation on Discord

THESTANDARD is the source of this content. This Press Release is for informational purposes only. The information does not constitute investment advice or an offer to invest. 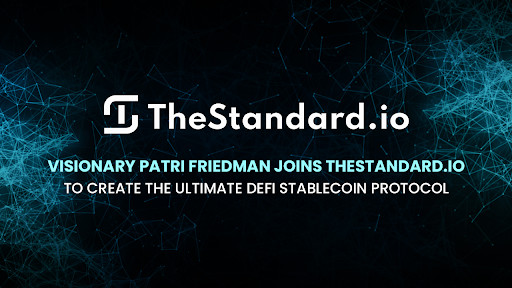