On October 10, Minsk will host Blockchain & Bitcoin Conference Belarus dedicated to cryptocurrencies, blockchain, and ICOs. It is the second time that an international organizer Smile-Expo holds the event in the capital of Belarus. The previous event was attended by more than 400 guests and involved experts from five countries. 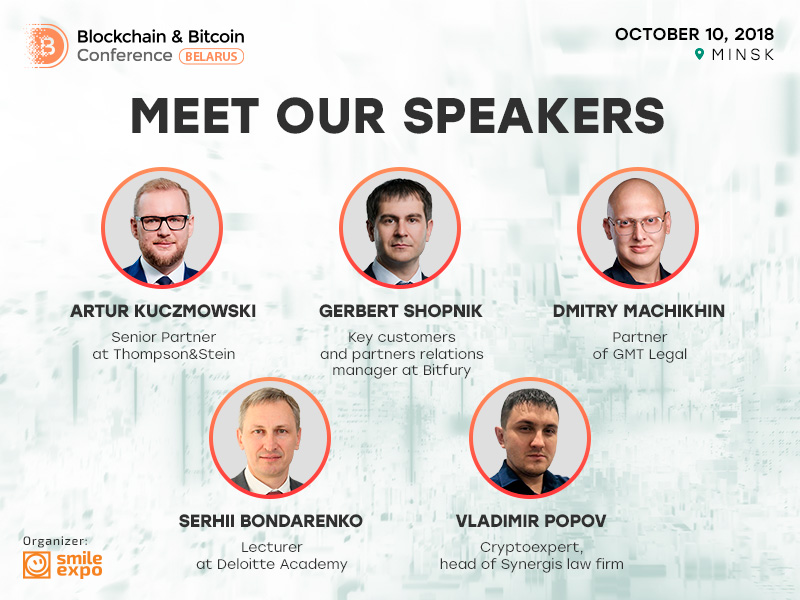 This year, Blockchain & Bitcoin Conference Belarus will give special attention to legal issues. What laws will help in anti-money laundering, how to launch an ICO correctly and enhance reputation using blockchain: these and other things will be revealed by experts from various countries and sectors.

Artur Kuczmowski: how to combat money laundering on the cryptocurrency market

Artur Kuczmowski is the senior partner at the international group of boutique law firms – Thompson&Stein specializing in law and tax consulting for the blockchain industry. The expert is a lawyer with long-term experience and the author of dozens of specialized articles in industry publications.

At the conference, Artur will talk about AML and KYC procedures as well as explain why they will be useful during anti-money laundering on the cryptocurrency market and how legal regulations in European countries and Directive of the European Union have changed the attitude to cryptocurrencies.

Gerbert Shopnik is a key customers and partners relations manager at Bitfury. The expert has long-term experience in working for such major international IT companies as Microsoft, VMware, and Lanit. He specializes in cloud technologies and blockchain.

Gerbert will tell the audience how the distributed ledger technology is applied in Russia, Ukraine, Georgia, and the USA as well as review scenarios for the public sector and commercial organizations in Belarus.

After working for a leading law firm called Clifford Chance in Paris and Luxemburg, Dmitry Machikhin became a partner at GMT Legal in Moscow. Currently, he professionally advises IT companies and startups around the world. Besides, he has launched several of his own projects. Since 2017, he has been on the Board of Directors of Midex IT.

At Blockchain & Bitcoin Conference, Dmitry will focus on ICO launching strategies. The expert will tell the audience what details should be taken into account prior to the token sale organization, how to choose an investor, define how much money an ICO should raise, and other ICO legal aspects.

Serhii Bondarenko is a lecturer at Deloitte Academy and the Chief Digital Officer at Deloitte Garage. The expert has been focusing on the IT and communication sector for 20 years. During this period, he became a leading technology specialist at Deloitte Ukraine as well as worked for Microsoft Ukraine, Raiffeisen Bank Aval, and Innovate.

The speaker believes that modern loyalty programs encumber customers with a variety of plastic cards, the majority of which are eventually lost. At the event, Serhii will reveal the advantages of a new approach to the loyalty program for businesses and solutions available to Bonex ecosystem participants.

Vladimir Popov is a crypto expert and the head of Synergis law firm. He has been engaged in the branch of jurisprudence since 2005, specializing in IT legal issues.

Vladimir will explain why reputation systems are important in 2018 and why reputation is the P2P system of the future, as well as reveal the foundation of a blockchain philosophy. Moreover, the speaker will examine case studies of launching ICOs of IT projects.

It is not yet a full list of speakers who will be involved in Blockchain & Bitcoin Conference Belarus. Other experts and event activities can be found on the website.

What is Blockchain & Bitcoin Conference?

Blockchain & Bitcoin Conference is a series of the events held by Smile-Expo in 25 countries. Some of them were already organized in Australia, Finland, France, Israel, Philippines, and other parts of the world.

Join the community of crypto enthusiasts at Blockchain & Bitcoin Conference Belarus that will take place on October 10, 2018, in Minsk-based DoubleTree by Hilton Hotel.