WIRESUMMIT 2018, an upcoming blockchain event for the broader Blockchain communities is around the corner. The private gathering of investors and Blockchain startups is being organized strategically in the capital city of India on December 2, 2018. The event is slated to attract blockchain enthusiasts, experts, influencers, and investors. 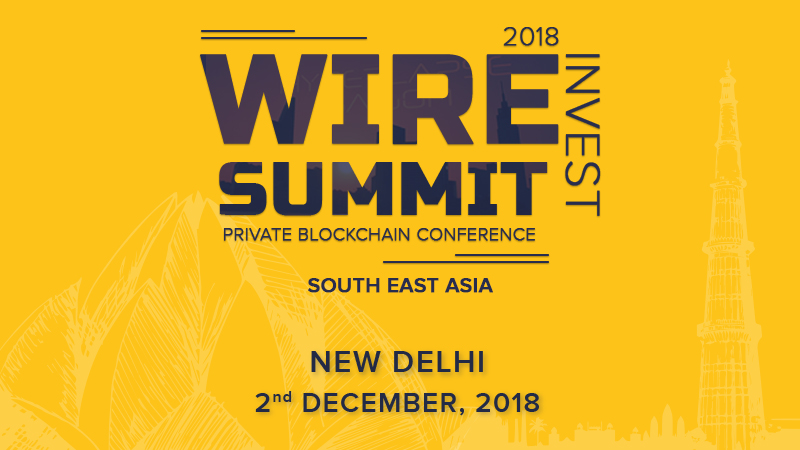 The #WireSummit is committed to becoming the largest and the most extensive Blockchain-oriented event of 2018 in the industry. It is organised by one of the most well-known news platforms in the industry, BTCWIRES. The Blockchain news outlet has in the past covered blockchain conferences and summits around the globe.

The theme of the event revolves around the promotion of Blockchain and DApp Projects for Investment Promotion, Facilitation and Execution.

The Wire Summit Invest 2018 has a special format where the attendance is only by invite. The event will bring together select Blockchain and DApp startups along with some of the most experienced investors and venture capitalists in the market.

As per their website, ‘Wire Summit’s Investor Edition looks forward to setting a benchmark in India when it comes to startup funding in India’. Sources at BTCWIRES elaborated that the primary goal of the Summit’s First Edition is to promote investment in revolutionary ideas of startups working in the Blockchain world. The Summit is poised to serve as the breeding ground for the world’s next and upcoming Blockchain companies.

A particular process devised for participation in the event enables both startups and investors to be shortlisted before the Summit based upon their Value proposition and Investment portfolio respectively. The particular idea was to maintain a high conversion ratio and successful closures. It will save a lot of time for the parties involved in conducting due diligence, verification and validation of the Proof of Concept.

The blockchain event will be graced by more than 1000+ investors, and it will be underscored by Keynotes from sought-after experts in the Blockchain world. With reputed media partners slated to cover the event, participating startups will get a chance to showcase their products and ideas to a massive audience around the globe. Startups and blockchain companies will get the chance to pitch their ideas and products to experienced investors, venture capitalists, and fund managers.

At the event one can also expect to network with some of the most influential people in the business world- from founders of pioneering startups, MDs, CxOs of the biggest firms, Vice Presidents, MDs, including professionals from Bluechip companies

How to reserve your seats?

The private nature of the event restricts the entry to only investors and chosen startups. The BTC Wires Team has made sure to include investors who have a definite knowledge in this particular domain and have shortlisted the same based upon their investment portfolio.

However, if you are keen to participate in this niche event, you can apply for consideration to the organising committee by requesting an invite to the official website of Wire Summit Invest 2018.