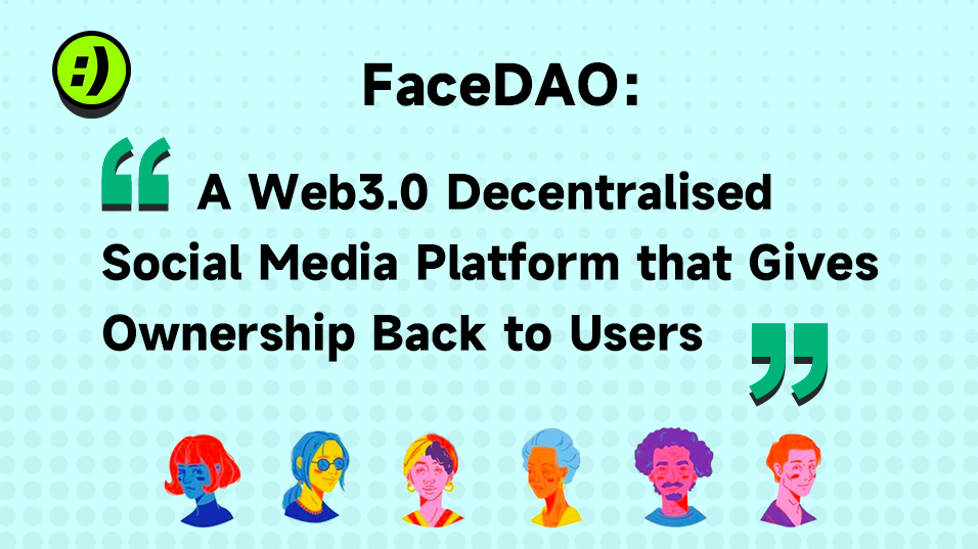 Social media is so evolved that it has become an essential part of our daily routine. According to Statista, as of 2021, each person spends almost 142-145 minutes on average using social media daily. While scrolling through social media, we come across several news, half of which are always fake. Our inbox got stuffed with messages from fake accounts. Even you, too, surely have created a fake account on social media. Because it is all very easy to do so. But how about a platform where you can be 100% sure that you are talking to a real person, not the bot, not the fake account? This is what FaceDAO has brought into the social media world.

FaceDAO is a web 3.0 decentralised platform where people can create and join the decentralised communities and interact with 100% real people worldwide. It is the next-generation social media platform built on the blockchain that provides a trusted and open environment to its users. The platform profoundly respects the freedom of expression and ensures that only genuine information and content is shared.

It offers highly innovative and distinctive features for social networks. The most exciting thing is it is free to use and easy to set up.

FaceDAO is more than Book. Web 2.0 social media, though ruling the digital world, it has many shortcomings. FaceDAO brought Web 3.0 to address all those issues providing power back to the users.

Let’s have a quick look at how FaceDAO, a web 3.0 decentralised social media platform, is better than a web 2.0 centralised platform.

Your FACE is your power in the Web 3.0 decentralised world

$FACE is FaceDAO’s network token. Every user has a unique FACE which is his private key and decentralised identifier (DID) that provides the channel for entrance to Web 3.0. FACE is minted on the Ethereum blockchain as an ERC-20 token. Its maximum supply is 1,000 trillion.

Users can earn for their efforts in the form of FACE tokens. All positive actions such as daily visits, likes, comments, share, post, etc., are automatically rewarded. The more FACE users hold, the more benefits they can enjoy. 90% of FACE is used for user rewards, airdrop, community tasks, and providing liquidity for trading. Users can also vote and elect custodians with FACE holdings.

FACE Giveaway: The world’s most extensive airdrop campaign ever

FaceDAO has launched the world’s largest airdrop campaign of $500 million USDT. Through this campaign, participants can get 100,000-2,000,000 FACE coins. Participants have to use their Web2.0 account to log in to Facebook/Twitter and identify the unique face. They can earn FACE rewards according to their Web 2.0 registration date, the number of posts, retweets, comments, likes, chats, followers, and other related data. The more data users will contribute, the more FACE reward they can earn.

Every person has a unique face and has the right to earn FACE.

Users can also invite others to earn more. The invitee will get all the FACE tokens given by others when he/she logs into FaceDAO, but the person who gave the most FACE will become his/her invitee and will get 1% of the dividend income permanently.

Note: 10 million users have only 1% of the circulating market value, so the current airdrop value is $500,000.

FaceDAO is created by the world’s leading decentralised team

Web 3.0 decentralised communities are the future. FaceDAO is created by people who are enthusiastic about the future, such as industry experts and software engineers from IBM, Google, Apple, Huawei, Facebook, and Tencent around the world. Their expertise and vision have made this project awe-inspiring.

The decentralised community is appreciating FaceDAO on a large scale

FaceDAO started its presence on various social media platforms recently. But the audience has turned out to significantly appreciate and show their love for this project by accepting it on a large scale. Within less than a month, the followers of FaceDAO have surpassed several thousand.

Join FaceDAO to enjoy the next generation social media experience

It is the right time to switch from Web2.0 to FaceDAO Web3.0 social media and say goodbye to all hassle. Because now, not only will you get the experience of an enhanced social media platform with several unique features, but you can also earn tokens through an airdrop campaign. A centralised system has played its part; the future is decentralisation, and FaceDAO is a blockchain-based decentralised platform.

Join FaceDAO today to explore more about it. And you are definitely going to love it!