Europe looks more and more like heaven for blockchain startups. European Commission announced that the region has already invested more than €80 million in blockchain projects and about €300 million more are to be invested in blockchain by 2020. According to Mariya Gabriel, Commissioner for Digital Economy and Society, Europe has great plans on blockchain: “In the future, all public services will use blockchain technology. Blockchain is a great opportunity (for European countries) to rethink their information systems, to promote user trust and the protection of personal data, to help create new business opportunities and to establish new areas of leadership, benefiting citizens, public services and companies.”

Experts believe that the region has an incredible potential. As reported by International Data Corporation (IDC) forecast, blockchain investments in Western Europe will rise from $400 million in 2018 to $3,5 billion in 2022. In four years this region will become the second largest blockchain investor after the United States (as it is shown on the graph). In 2017-2022 the fastest growth of blockchain spending will characterize such vital industries as manufacturing (78.8%), professional services (77.7%) and banking (74.7%). 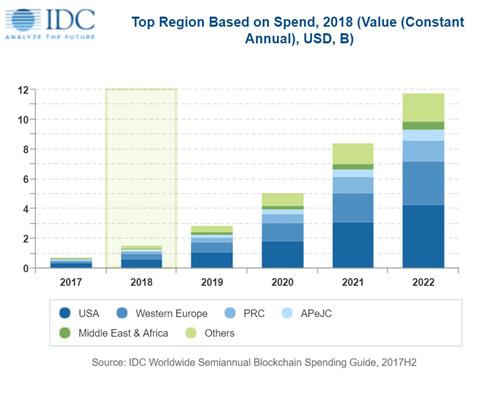 Striving to make blockchain implementation more efficient, 23 European nations formed a Blockchain Partnership on April 6, 2018. The countries of the union aim to exchange experience and promote blockchain applications across the EU-wide market.

The aim of IDACB is to help entrepreneurs from all over the world to enter European blockchain market. 11 days, 6 countries, and the greatest chance to build partnerships with European foundations – this is European World Blockchain Roadshow (WBRShow) organized by the Association.

Two WBRShow Pitch Sessions, giving ICO teams an opportunity to promote their projects, will be held during each meeting. Participants will have an opportunity to communicate one by one and discuss all the essential issues on Coffee-breaks. Preappointed meetings with the investors are also available.

Europe believes in blockchain and actively supports decentralization activists. Taking place in 6 European crypto capitals, WBRShow gives entrepreneurs an opportunity to come into a close contact with the market of the region. Do not lose this opportunity and join WBRShow until it has not begun!

It’s possible to get investor’s or VIP investor’s ticket and Silver or Golden Packages for ICOs here. A free entrance for investors is provided.

About IDACB
IDACB is the largest International Decentralized Association on Cryptocurrency and Blockchain. It’s the leading non-profit organization the concept of which is to connect crypto and blockchain community and various countries’ officials to work out a unifying approach for international legislation on cryptocurrencies and blockchain. The influence of the Association is ensured by the participation of 90 countries.