– More than 750 people participated from 50 countries

– Participants voted Slock.it as winner of the “Top of the Horizon”-prize, which was awarded with a €100,000 investment by Scytale Horizon

After a successful premiere of EventHorizon in Vienna last year, more than 750 participants from 50 countries travelled to the second edition of the blockchain energy conference (17th-19th of April 2018) to Kraftwerk Berlin. Visioneers and experts of various fields were debating at EventHorizon about the future of the energy industry, which could be affected significantly by the innovative blockchain technology.

EventHorizon is more than a normal congress – attendants of the event know that now. Priority was given to the decentralized character of blockchain technology. At the event itself, the decentralized character of the blockchain was in the foreground, whereby the participants were empowered to act on their own responsibility and participate proactively as in a blockchain based reality. Various stations at Kraftwerk Berlin could be activated with the personalized badge. When registering the conference ticket, the attendees were asked about their own interests and opinions, which were stored on the badge. By using the badge in the Mood Room the participant was transferred to the individual travel destination of his choice, at the Networking Wall his own interests were compared with those of other participants and in the digital newspaper, the “EventHorizon Times”, the participant could read about himself. All photos taken of the participants were sent to the personal “Navigator” by placing the badge on the camera. So the participants got their photos in a few minutes.

The “Navigator”, a browser-based event app, not only included the agenda, but also functioned as a messaging tool that connected all participants together. With the aid of the “Navigator” it was possible to ask questions to speakers, which were answered in Q&A’s, and to vote for the “Top of the Horizon” award. By using Augmented Reality, a virtual signpost system was implemented for the first time at a congress. 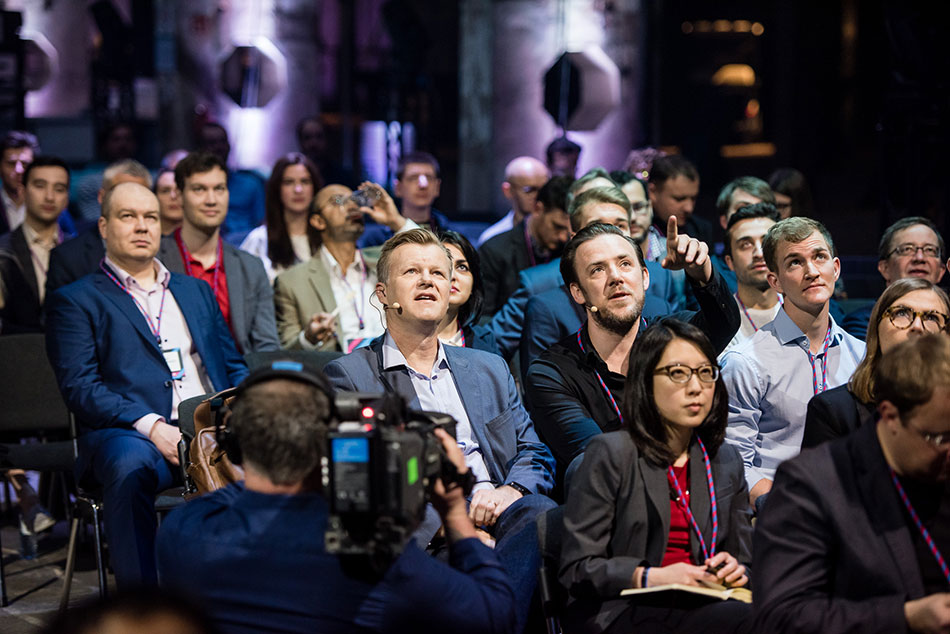 Innovative ideas for the future

EventHorizon focused on all relevant topics around the innovative blockchain technology and its effects on the energy sector. Over 40 international top speakers and 40 start-ups presented their business models, innovative solutions and projects in keynotes, panel sessions, investor talks, corporate and startup pitches. Another nine start-ups introduced themselves in the Expo Area.

Sebastian Copeland, polar researcher and climate protector, started the first day with his keynote and presented facts and figures about the planet earth. Copeland underlined the need for change in the energy sector. Christoph Frei, Secretary General World Energy Council, built upon that thought and also emphasized, how busy energy experts are with the blockchain technology: “Blockchain is the number one topic that keeps 3000 energy experts from 91 countries awake at night. Blockchain is the key to exploiting the full potential of decentralized power supply.” At the Corporate and Utility 2.0 Pitches innovative approaches were presented, such as sonnen and TenneT, who use the blockchain technology for power storage. The Regulatory Panel was the last item on the first day’s agenda. As one of the visionaries of the first day, Kiumarz Goharriz Chahin, member of the Information and Statistics Department of the National Energy Commission of Chile, explained how Chile became one of the first countries to use blockchain technology for the energy sector and talked about its advantages: “Blockchain technology is helping to increase trustworthiness into the energy sector of Chile by connecting the existing open data platform to blockchain network enabling traceability, security and integrity of their data. All of those help to increase transparency and reduce information asymmetries.”

The Keynotes of the second day, such as those of Julian Hosp, Co-Founder and President TenX, encouraged EventHorizon participants to use blockchain technology to find innovative solutions to real world problems outside of the bitcoin hype. Later, 40 leading startups from all over the world met for the first time and presented their business models, solutions and projects in 15-minutes pitches, where two of the start-ups were held parallel to each other in silent mode. These included pioneers such as Slock.it, Electron, PowerLedger and Riddle&Code. Parallel to the pitches, various specialist topics were intensified in deep dive sessions with workshop character. The second day ended with the Investor Talks, where Jamie Burke and many more showed how investment strategies will be impacted by new technologies like blockchain. Ramona Liberoff went one step further, highlighting the need for a paradigm shift in business models.

On the third day, the technology was discussed in depth and all open questions were answered in the Tech Talks and the Security Panel. Ewald Hesse, Vice President Energy Web Foundation, emphasized the importance of energy singularity in this context. The Energy Access Panel also showed the great importance of blockchain in developing and emerging countries. The last panel, consisting of climate ambassadors such as Sebastian Copeland, Tom Dindiwood, Josh Fox and Paul Fox, discussed how change can be brought about.

“Top of the Horizon” Award

As the highlight, the “Top of the Horizon” were chosen in four categories on the third day of the event. Orlando Gehring was the first to buy his ticket to the conference and was awarded true to the motto “Flip the switch & turn on the power of tomorrow. Today” for a “pioneering role”. The conference participants chose their favorite from the corporate pitches and chose sonnen and TenneT as the winner in the “Utility 2.0” category. The start-ups that exhibited their company in the Expo Area were also able to vote for the visitor with whom they had the most interesting discussions. Jonas Bentke was elected “Influencer of the Future”. The most important award went to Slock.it. The start-up convinced with the pitches on the second day and was selected by EventHorizon participants as a favorite. Slock.it received an investment of 100,000 euros and a workshop with the consultants and the investment team of Scytale Horizon as a surprise.

Ed Hesse, initiator of EventHorizon: “The success of EventHorizon underlines how important blockchain technology is for the future of the energy industry. We are all the more pleased that we were able to win such a top-class line-up of speakers, start-ups and participants for the event. Together with the innovative and interactive concept, EventHorizon has already established itself in its second edition as a pioneer for international technology conferences”.

About EventHorizon:
EventHorizon – Global Summit on Blockchain Technology in the Energy Sector – is the one exclusive annual event centered on energy blockchain solutions for a future based solely on renewable resources. It is a game-changing platform for the development of a customer focused, fair energy future. Once a year, EventHorizon unites the Who’s Who of both the traditional energy and innovative Blockchain sectors. The 2018 motto “Flip the switch & turn on the power of tomorrow. Today!” calls for a paradigm change and takes guests on a unique “journey” into the future of the industry.