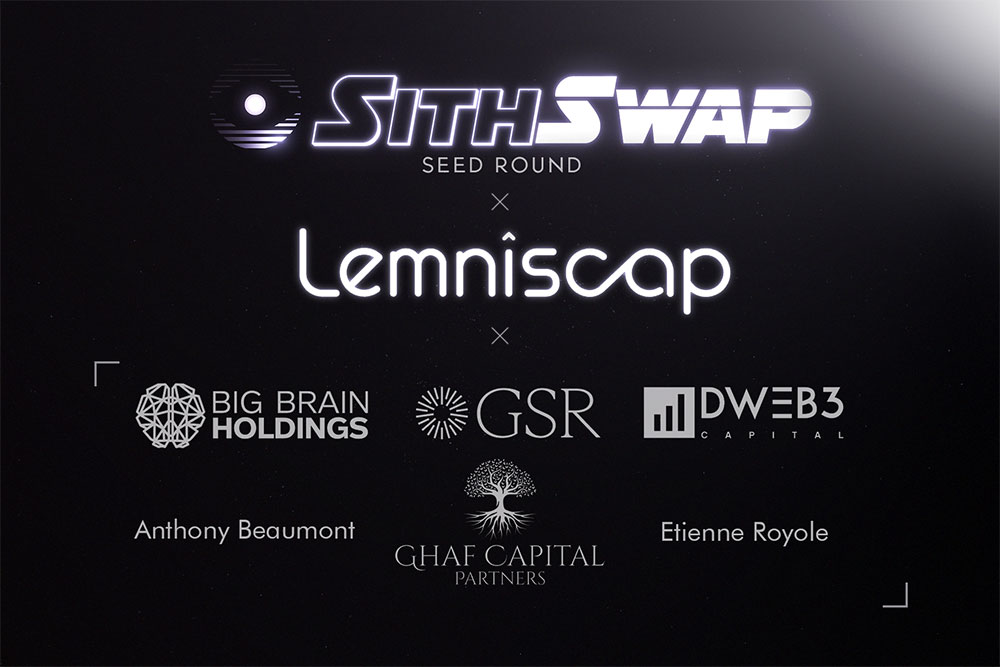 SithSwap will use the seed capital raised to expand its talent pool by hiring talented Cairo developers, and expedite the deployment of the core AMM contracts to the Starknet Alpha Mainnet.

Roderik van der Graaf, Founder of Lemniscap, said: “Next-gen AMMs have been sorely missing from the promising StarkNet ecosystem, and it is beyond exciting to finally see one with a novel and unique design entering the fray. We are fully confident in the team’s capabilities, and that SithSwap will achieve its goal of delivering stable swaps on Starknet that will redefine the future and scale of DeFi.”

StarkNet — a permissionless, decentralised Layer-2 network built over Ethereum that delivers cutting-edge ZK-rollup technology — has been gaining traction through enabling developers to build decentralised applications that are both secure and scalable. However, despite StarkNet’s potential and popularity, advanced stableswap AMMs are currently missing from its ecosystem. SithSwap seeks to bridge this gap by building early on StarkNet and providing instant volatile and stableswaps with ultra-low slippage and near-zero gas fees.

Sidius, Founder of SithSwap, said: “Our passionate team is fueled by a strong resolve to build out the next generation of DeFi at the final frontier of Ethereum, powered by StarkNet’s groundbreaking ZK-rollup technology. With the collective strength and resolve of our Solidity and Cairo engineers, we believe that SithSwap can comprehensively address the pressing need for a next-gen, easy-to-build-on AMM for the flourishing Starknet ecosystem.”

As a hybrid-engined AMM, SithSwap seamlessly integrates both the stableswap and constant-product engines to offer users extremely low slippage on tightly correlated asset pairs, without renouncing the familiarity and ease of integration provided by the timeless Uniswap V2 contract design and architecture. By leveraging StarkNet’s ZK-rollup technology, SithSwap will also be able to provide all of the above at near-zero gas fees for end users as well as 3rd-party protocols seeking a battle-tested AMM to build on top of.

SithSwap also recently signed on with Nethermind for a full Cairo audit (2500 LoCs) of its AMM codebase — reiterating its firm and critical commitment to security and safeguarding users’ assets. Nethermind is the leading Cairo smart contract auditor and one of the closest and earliest technical partners of StarkWare, having built core StarkNet infrastructure such as the Solidity-to-Cairo Warp transpiler and the Voyager block explorer.

To join SithSwap or to find out more, please visit https://sithswap.com/.

About SithSwap
SithSwap is a next-gen Automated Market Maker on StarkNet featuring instant volatile and stable swaps with ultra-low slippage, near-zero gas fees and the full security of Ethereum. SithSwap will natively support pool gauges, bribes and protocol rewards that can be locked in exchange for voting power to govern future protocol emissions and 3rd-party incentives. For more information, visit https://sithswap.com/.

About Lemniscap
Lemniscap is an investment firm specialising in investments in emerging crypto assets and blockchain startups. Since its founding in 2017, Lemniscap has funded multiple investments in the crypto blockchain space, on the core belief that blockchain technology will upend traditional business models, resulting in profound changes in the world economy. The Lemniscap team consists of talented people with backgrounds in financial markets, PE/VC, technology and entrepreneurship. For more information, visit https://lemniscap.com/.