Terra, the company building the next-generation blockchain payments network, is powering a recently-launched mobile payments app called CHAI that allows anyone with a bank account to pay online using blockchain technology. Currently available on two major eCommerce platforms including household name TMON, the payments app is enabling widespread adoption of Terra’s blockchain technology by the customers of some of Korea’s biggest online platforms. 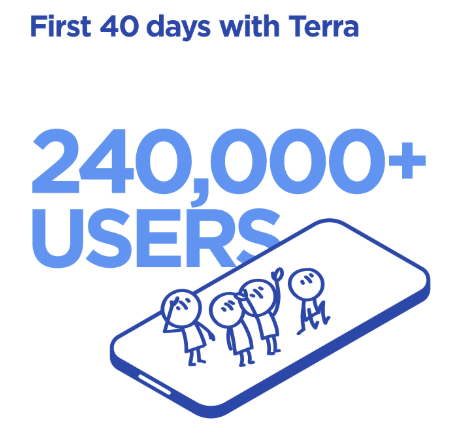 The blockchain industry has always struggled with driving mass adoption. However, Terra is living proof that given the proper infrastructure and UX design, penetrating a mainstream market is something completely tangible for the blockchain world. Within just a month of its launch, CHAI’s payments app became the 4th most popular finance app on the AppStore, and the 13th most popular on Google Play. Just 40 days after launching, it has gained over 240,000 users who have made 380,000 transactions.

Here are some more fun facts*:

Check out our infographics here: https://drive.google.com/drive/folders/1ZUzn_PPqbIdcsCDxQnZngIXs_ziw1ITn

“We are proud to be bringing blockchain into people’s daily lives. Just 40 days after launching, Terra’s blockchain technology has been used to power 380,000 transactions for more than 240,000 users. In fact, the other day, we saw a record-high daily transaction volume of 1 billion KRW, which implies a $300 million transaction volume run rate,” says Daniel Shin, Co-Founder of Terra. “The blockchain industry has struggled to gain a large user base, which is why these numbers are extremely meaningful and show that penetrating a mainstream market is not an impossible mission for the blockchain world. We are excited to continue to grow by integrating with the rest of our eCommerce partners and become the major driving force for blockchain mass adoption.”

Terra has hit several additional milestones in the last six months, securing strategic investments from LuneX Ventures, the blockchain-focused investment arm of Golden Gate Ventures, as well as Kakao Investments and Kakao Ventures. It has also expanded its eCommerce alliance to include 25+ platforms across 10 countries in Asia.

*Based on information received from CHAI

About Terra
Terra is designing a price-stable digital currency that will power the next-generation payment network on the blockchain. Terra partners with an ever-growing alliance of global e-Commerce platforms to bring blockchain’s benefits such as low transaction costs to merchants and everyday consumers. By bridging the gap between digital currencies and real-world application, Terra aims to evolve into an open platform for innovative financial dApps and grow the real GDP of the blockchain economy. Founded by a team of business, finance and blockchain experts, Terra has offices in Singapore and Korea.
For more information, go to https://terra.money/
Follow us on Telegram: @terramoney
Visit the Terra blog for regular updates: https://medium.com/terra-money